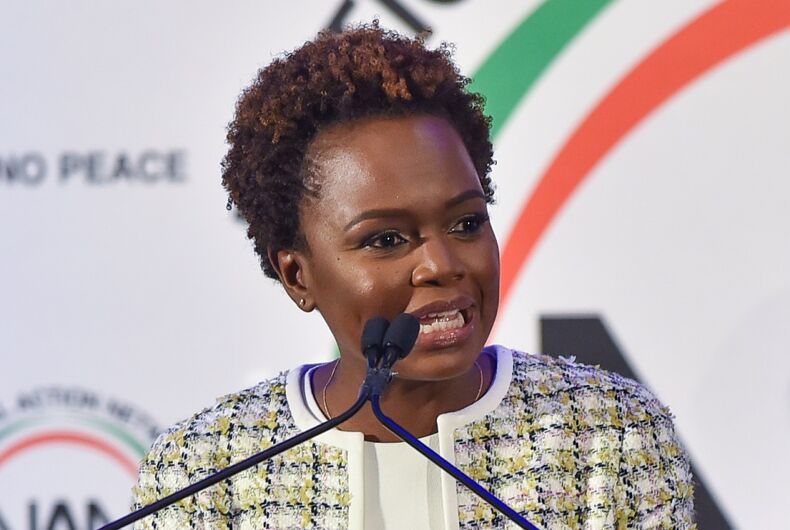 Black lesbian political powerhouse Karine Jean-Pierre will be one of seven women in top communications positions for the Biden White House.

“For the first time in history, these communications roles will be filled entirely by women,” the Biden/Harris transition team said when announcing the seven members of the future Biden administration.

For the first time in history, these communications roles will be filled entirely by women.https://t.co/SjWAWJg941

Jean-Pierre served as Kamala Harris’s campaign chief of staff this past year, making her the first Black person to serve as chief of staff to a vice-presidential candidate and one of the highest-ranking LGBTQ people in the Biden/Harris campaign.

Now she will serve as the principal deputy press secretary for the White House.

“I’m so proud that our communications team for the Biden-Harris administration is a roster filled w/ rockstar women,” Jean-Pierre tweeted. “All will bring dignity, professionalism and expertise to their respective roles!”

I’m so proud that our communications team for the Biden-Harris administration is a roster filled w/ rockstar women: @jrpsaki, @KBeds, @SymoneDSanders, @AshleyEtienne09 @EAlexander, @pilitobar87 All will bring dignity, professionalism and expertise to their respective roles!

Hiring only women for the communications team is meant to ensure that the media listens to women when reporting on the White House, according to Biden campaign aide Anita Dunn.

“The odds are very high that if it’s a story about the Biden administration, any aspect of it, at least one quote in the story will be from a woman,” Dunn told the Washington Post.

Jean-Pierre will not be the first out deputy White House press secretary. Judd Deere, who is gay, held the same title during the Trump administration.

Update: The Washington Blade notes that Pili Tobar, who will be the deputy White House communications director, is also a lesbian and previously worked as the Biden/Harris campaign’s communications director for coalitions. She has previously worked as the Hispanic media director for Senate Minority Leader Charles Schumer and the national director of Hispanic Media and Western regional press secretary for the Democratic National Committee.

Joe Biden will make LGBTQ rights a priority after inauguration