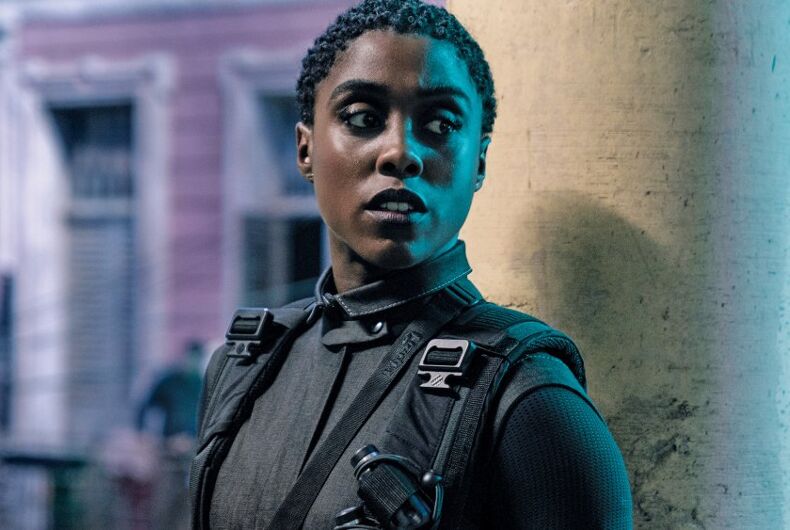 Out actor Lashana Lynch is 007 in the new Bond movie, No Time to Die.Photo: Promotional photo

Out actor Lashana Lynch has confirmed that she will be the new 007 in the James Bond universe. The lesbian actor will portray Nomi, a Black lesbian secret agent, in the long-running franchise.

According to the rumor mill, James Bond will die at the end of the upcoming movie, passing the title of 007 to Nomi. No Time to Die will be the 25th Bond film; until now the super spy has always been portrayed by a white man.

Related: What if James Bond were played by a trans woman?

Rumors have circulated for over a year that Lynch would earn the 007 title, and insecure white men quickly started attacking the Captain Marvel star on social media. Without confirming she would play the role, she addressed the online trolling late last year.

“It doesn’t dishearten me. It makes me feel quite sad for some people because their opinions, they’re not even from a mean place — they’re actually from a sad place,” she said in November of 2019. “It’s not about me. People are reacting to an idea, which has nothing to do with my life.”

In an interview with Harper’s Bazaar, she confirmed the rumors and addressed how she would handle the controversy that was sure to erupt.

“I am one Black woman — if it were another Black woman cast in the role, it would have been the same conversation, she would have got the same attacks, the same abuse,” she said. “I just have to remind myself that the conversation is happening and that I’m a part of something that will be very, very revolutionary.”

Reportedly, James Bond, the misogynist and rather racist super spy portrayed by multiple actors, will die at the end of the movie. Some outlets have reported that Lynch’s character, Nomi, will kill him after being ordered to do so by headquarters.

The movie’s theme song, written and performed by Billie Eilish, is all about betrayal and death.

Anti-LGBTQ pastor who blamed “fornication” for coronavirus dies of COVID