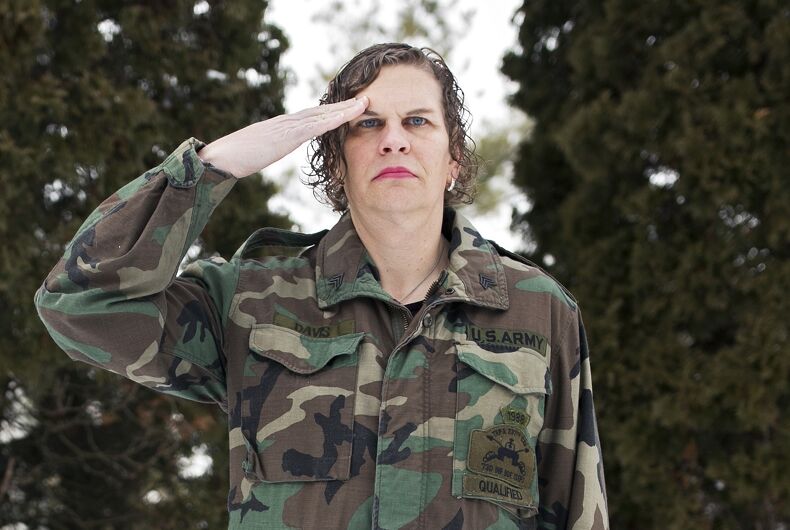 Jody Davis stands outside of her home in Columbus, OH on January 22, 2019. Davis served as part of a tank crew in the guard in the 1990s.Photo: Maddie McGarvey

As a veteran who served nearly a decade in the Army National Guard, I was devoted to defending the freedoms that all Americans hold dear. On this Transgender Day of Remembrance I’m asking Congress to do the same, and ensure those freedoms for millions of LGBTQ Americans by supporting a federal law that prohibits LGBTQ discrimination nationwide.

I am a transgender woman. It took many years for me to be able to say that. When I was growing up a young boy in Cincinnati, I knew I was different but wasn’t sure why. It was the 70s. I had conservative Catholic parents and no internet. I didn’t have a real understanding of what I was experiencing. There weren’t any words, or anywhere to talk about it.

In my teens, I tried to fit in. I was a 16-year-old high school student in an all-boys Catholic High School in Cincinnati, being severely bullied for being “different.” I remember wanting to go down the cosmetics aisle but being so afraid that someone would see me. I kept my secret at home behind closed doors.

Eventually, I joined the military. I saw the service as a way to serve my country, pay for school, and “man up” and put away all of these thoughts and feelings that I was really a girl. I served as an Armor Crewman and Cavalry Scout in the Ohio Army National Guard from 1987 to 1995.

The military was a positive experience. It took away what was personal. We shaved our heads, wore uniforms. It was the first time I felt equal to those around me. The military improved my self-esteem and taught me the importance of hard work, dignity, and respect for others.

After my service, I moved to Columbus to finish a master’s degree in Social Work at Ohio State. While there, I got involved in the LGBTQ community. At first, I was just an ally, but over time I began to identify with most of the letters.

I officially came out as transgender in 2013, to friends, family, work, and more open to my wife at the time. Through my transition, my life was turned upside down. Most of my family reacted negatively, my marriage ended, and I was worried about losing my daughter.

The church rejected me. I had to move several times, and experienced discrimination for the first time in my life. Even though the city of Columbus has protections for gay and transgender people, I was denied housing multiple times. It took months to find a place to live, a place where I could sleep and my young daughter could come visit me.

That’s all I wanted, a safe place to live until I could get my feet back under me.

Since I was a white male prior to my transition, I had never really experienced this kind of discrimination. I really didn’t understand how much privilege I had until I was vulnerable to bigotry and transphobia. In 2017, my wife and I faced discrimination while trying to get wedding dresses at a bridal shop that is part of a national chain.

A recent survey found that more than one in three LGBTQ Americans faced discrimination of some kind in the past year, including more than three in five transgender Americans. More than half of LGBTQ people say they experienced harassment or discrimination in a public place such as a store, on public transportation, or in a restroom.

Ohio, like 29 other states has no explicit statewide nondiscrimination laws protecting LGBTQ people, and opponents of LGBTQ equality continue to file discriminatory bills nationwide. The best solution is the federal Equality Act.

This bipartisan legislation would update federal law to include express and enduring nondiscrimination protections for 13 million LGBTQ Americans across virtually every area of daily life. I hope Senator Rob Portman and others will join me in agreeing that we all should be free to go about our daily lives — shop in a store, check into a hotel, and eat a meal at a restaurant —  without fear of harassment or discrimination.

I now work as a nurse at OSU Med Center, and as a part-time social worker at Veterans Affairs. I regularly hear stories of people struggling with their gender identity and military culture. I work with people who have faced discrimination both in and out of the service. I’m also a board member of Equality Ohio, focusing on legislative change.

It is past time that we passed the Ohio Fairness Act and the National Equality Act. The Ohio Fairness Act has broad bipartisan support and has the support of over 1,000 Ohio businesses. We need uniformity under the law to support LGBTQ people simply being able to live their lives. We have 32 localities that have passed protections, but our rights should not depend on your zip code. A patchwork of rights does not work.

I still believe that equality is an American value, one I’ve spent many years defending. I’m proud of my service. But it’s shameful that I served my country,  yet was denied housing in my home state.

It’s time for Congress to do its job and pass legislation that protects LGBTQ Americans in all aspects of our lives.

Jody Davis, RN, LISW-S,  is a Christian woman, a veteran, and a mom who happens to be transgender. She lives in Columbus, Ohio, with her wife, daughter, stepkids, and dogs.