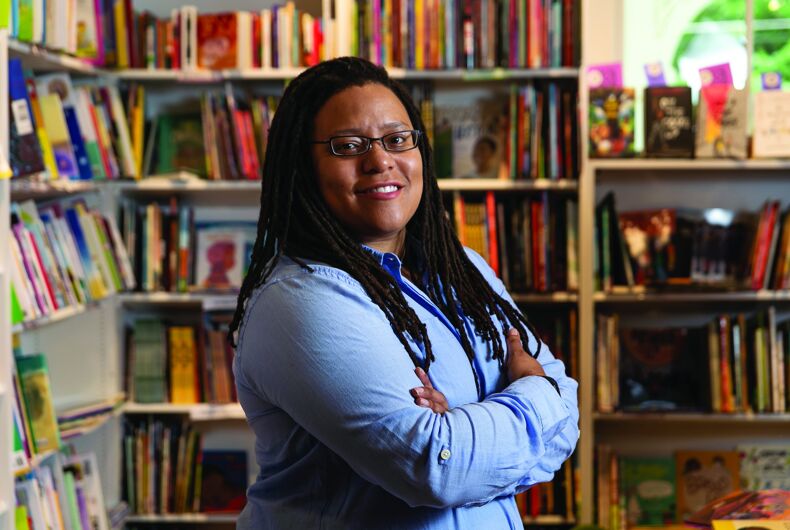 Democratic candidate Kim Jackson has made history tonight. She has been elected as Georgia’s first ever openly LGBTQ State Senator, earning nearly double the votes of the Republican incumbent.

In the entire country, there’s only two Black LGBTQ-identifying women serving as state senators. Jackson will enter as the third.

Much of Georgia will remain unclear for the immediate future. The U.S. Senate race between challenger Rev. Raphael Warnock and incumbent Sen. Kelly Loeffler is going to a run-off, and it is too close to call the state for the Presidential election, by all accounts. At least one county, Fulton – which happens to be its most populous – will be delayed in reporting results as a burst pipe in the State Farm Arena affected their counting process.

But with about three-fourths of the vote so far, Jackson is the clear winner in her race. She wrote on Facebook that she’s “eagerly awaiting the final vote count” before celebrating a victory.

Born in rural South Carolina, Jackson has called Georgia home for more than a decade. She’ll represent District 41, which includes parts of outer Atlanta and Marietta, Georgia. She was endorsed by the LGBTQ Victory Fund and one of Emory University’s 2019 “40 under 40.”

There has never been an openly LGBTQ State Senator in Georgia, and it shows by the bigoted bills they’ve passed. Our Spotlight Candidate Kim Jackson's win tonight changes that. Congratulations on your victory, @KimforGeorgia! pic.twitter.com/5Ism7PN2ti

Jackson was a nominee for Up & Coming Politician of the Year in the LGBTQ Nation Heroes Awards for 2020. Two other nominees, Ritchie Torres and Mondaire Jones, have also won so far.

Jackson is also an Episcopal priest. In fact, she was the first out person of color to be ordained in the Episcopal Diocese of Atlanta, but she believes strongly in the separation of church and state. This contrasts with religious conservatives who champion religious freedom to introduce anti-choice and anti-LGBTQ bills (often with legs) in the Peach State.

Jackson is the interim vicar at Church of the Common Ground, focuses on serving Atlanta’s homeless population.

Jackson’s key campaign policy is to propose a “comprehensive anti-discrimination bill,” which would include sexual orientation, gender, religion, and ability. Right now, Georgia doesn’t have codify these identities in any anti-discrimination law on the books.

Reducing incarceration rates, affordable housing and sustainable solutions for people without homes, stricter gun laws, and creating a better quality of living for Georgia’s most marginalized — with more accessible childcare, Medicaid expansion, and upping of the minimum wage — are also critical parts of Jackson’s platform.

Jackson told LGBTQ Nation in March she seeks change specifically in the state Senate chamber because most anti-LGBTQ bills in Georgia are introduced there, rather than the House: “I think that’s in part because they don’t have any colleagues who are part of [the] community,” she said.

Jackson truly does “bring a fight…and a willingness to speak up and to advocate, and to insist that we do better for everyone,” she also told us.