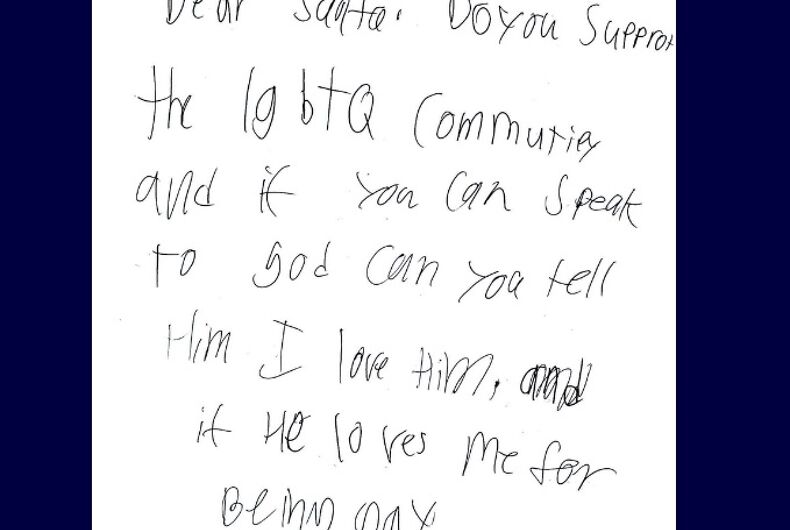 A letter to Santa sent by a gay kid named “Will” is breaking the internet’s heart.

Each year, the United States Postal Service conducts “Operation Santa,” sending responses to letters to Santa. In many locations, private organizations and citizens can help out, and some of the letters get posted to the USPS website.

The program opens on December 4, but to build interest in the program USPS posted letters from previous years. One of them is from Will, who says he’s gay and asks Santa if he can ask God if “He loves me for being gay.”

Do you support the LGBTQ community and if you can speak to god can you tell Him I love him, and if He loves me for being gay.

No other information about Will is available on the site. It’s not known what he had been told to make him think that God can’t love him if he’s gay, whether he had to hide his letter from his parents and send it secretly, or if he was worried that a response to the letter could out him.

While Twitter is full of straight people saying he’s too young to know that he’s gay – these are possibly the same straight people who ask two-year-old girls if they’re breaking boy’s hearts or three-year-old boys if they have a girlfriend yet – a lot of people just wanted to send Will some support.

WHO IS TELLING THESE QUEER CHILDREN THAT SANTA DOESNT LOVE THEM

This hurts my heart so much. I hope will and all the other little lgbtq+ babies know (and get told) they’re so, so loved. For those who believe in Christianity, yes, God loves you. Don’t believe those who say he doesn’t. 😭🥺

This is what I mean when I say straight cis people will never know what it’s like to be one of us.