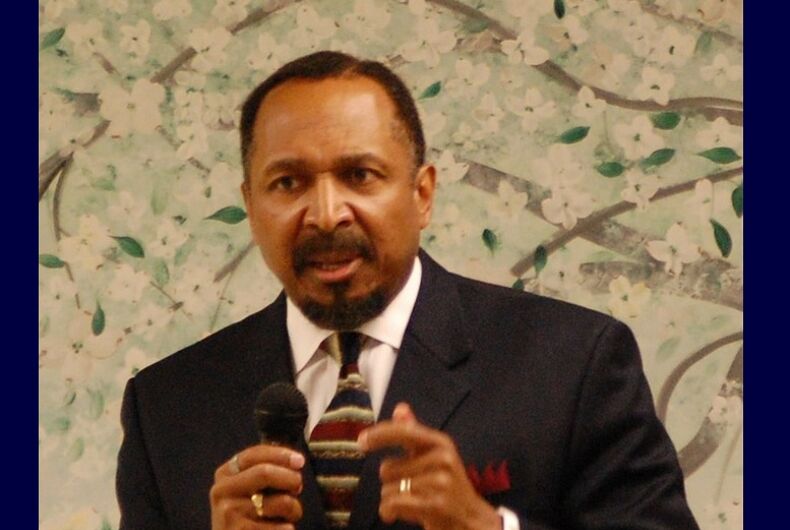 E.W. Jackson – a failed Republican Senate candidate, conservative pundit, and Christian pastor with a long history of extreme anti-LGBTQ statements – has been diagnosed with the COVID-19 virus after he claimed he couldn’t get it because “I’ve taken my vaccine, and my vaccine is Psalm 91.”

In a Facebook Live sermon earlier this week, Jackson said that both he and his wife had been diagnosed with the novel coronavirus even after claiming multiple times that he wouldn’t get it.

He referred to Psalm 91, which says in part: “Whoever dwells in the shelter of the Most High will rest in the shadow of the Almighty… surely he will save you… from the deadly pestilence.”

Most Christians do not understand that passage to mean that they are impervious to contagious disease. In that sermon, Jackson said “of course [Christians] can” get coronavirus.

“I will not get the coronavirus,” he said in another sermon that was posted online. “I’ve asked God to protect me from it, and I’ve confessed Psalm 91 over my life and over the life of my congregation and over the life of our families, and we’re not getting it in the name of Jesus.”

But on Monday, Jackson said that he got the virus. “I’ve been out for the last several weeks probably because I was speaking somewhere else, and the last week I was out, because I was tested positive for COVID-19.”

He told Newsweek in a telephone interview that the reason he got coronavirus was that he has not been taking Sundays off.

“I’ll tell you what exactly what I believe really happened to me: the Bible says we’re supposed to rest one day a week, and I’ve been working seven days a week probably for – I don’t know – who knows how long. So while I’m confessing that I don’t have it – I’m not gonna get it – I’m wearing myself off.”

The fact that faithful Christians can get coronavirus is not news to millions of Christians all over the world who have gotten the virus or who have loved ones who have.

Jackson has a long history of anti-LGBTQ statements, complaining just last year about Pete Buttigieg and the “gay mafia” imposing a “homo-ocracy” on America.

“One of the things he did to commemorate the announcement, Pete Buttigieg, was to kiss his husband on stage,” Jackson said. “A big old smack in the mouth between two men.”

Jackson, who ran for U.S. Senate in 2011 and Virginia Lieutenant Governor in 2013 and failed both times, has previous said that gay people are “frankly very sick people, psychologically, mentally, and emotionally” and “sexualize [children] at the earliest possible age.”

During his Lieutenant Governor campaign in 2013, Jackson said that marriage equality said that “Adam and Steve” will “soon be Adam and a bull.”

Earlier this year – just a month before he was claiming real Christians can’t get coronavirus – he said that liberals hate Donald Trump because he’s “just too much of a man for them” and “the radical feminists, the homosexuals, the transgenders, whatever bizarre idea they have of who we’re supposed to be.”

“Obama was effete,” Jackson said. “Obama was light in the loafers.”

And this past June, he said that the LGBTQ Supreme Court victory in Bostock v. Clayton County was “a vicious demonic spiritual attack and we had better put on the whole armor of God.”

“It is a declaration of war on the American people, our businesses, culture, Constitution and our Judeo-Christian values,” Jackson said, explaining that firing an LGBTQ person is just “protecting your business” from “some mentally ill person.”

Anti-LGBTQ hate crimes increased during the Trump administration. Will Biden turn this around?