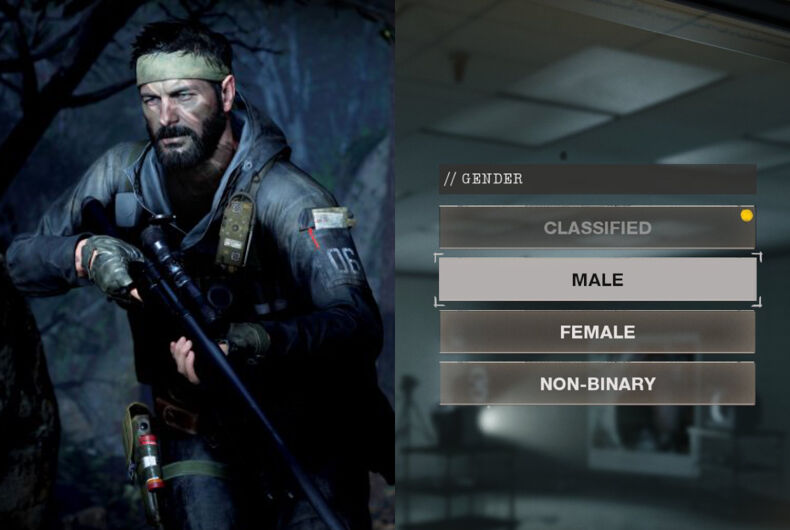 The gender selection screen in the newest "Call of Duty" title.Photo: Screenshot via Twitter

Players in the latest title from the Call of Duty franchise now have an option to identify their character as non-binary, and some cis players are outraged.

The most recent game in the Cold War-era first-person shooter series is Call of Duty: Black Ops Cold War, released earlier this month. The game allows player to customize their characters by choosing their name, hometown, backstory, and skin color. And it has an option to set the character’s gender to male, female, non-binary, or “classified.”

Related: Pokémon Go may have just confirmed that one of its major characters is non-binary

“I don’t think there were ‘non-binary’ people back in the 1980s, Call of Duty,” wrote Ian Miles Cheong on Twitter, incorrectly implying that non-binary people just started existing recently. In reality, people who don’t identify as either men or women have existed in many cultures and throughout history, often under different names specific to their cultures.

I don't think there were "non-binary" people back in the 1980s, Call of Duty. pic.twitter.com/ue4TWFsC7f

Others also complained and made hateful comments about non-binary and transgender people.

There are gay an non-binary people in my video game. Our nation is collapsing.

Its not realistic and it breaks immersiin too much, its also cringy virtue signalling and thats why people dont like it.

But others called out the transphobia, telling them to just let people live their lives, no matter their gender.

Why does gamer culture have to be like this? It's 2020. People can identify as non-binary/gender-neutral/etc. Let people be happy and stop the hate. It's a bad look.

Others called out the arguments that non-binary characters would ruin the game’s realism… when the game itself is far from realistic.

in call of duty you can get shot in the face with a shotgun at point blank range, hide behind a bush and fully recover yet being able to play as non binary is what breaks the realism for ian pic.twitter.com/mHOWwSLaYe

It’s Call of Duty, not the history channel. Zombies didn’t exist back then either while we’re at it https://t.co/gg4TkXiNla

The Call of Duty franchise has faced criticism in the past when it comes to gender. Originally, players could only have male characters.

Earlier this year, the game’s developers announced that they would be adding the “classified” gender option in addition to male and female. “Classified” was originally meant to be a stand-in for non-binary people and choosing “classified” would trigger the computer to refer to the character with “they” pronouns.

Dan Vondrak of Raven Software explained the “classified” gender option in an August interview: “We didn’t want to exclude anybody” from the character creation process.

“The option to leave [other fields] classified was super important. There’s only so many backgrounds we could have, so many places of birth we could have listed in the game. I said, ‘Hey, if we don’t have something that someone wants, let them leave it classified, and they can be that mysterious, shadowy Black Ops special operative character they want to be,'” he said.

“When it came to gender, the same thing was thrown out. Why can’t we leave that classified? There’s no reason we can’t do that. We’re already going to make it change the “he and she,” so it was easy enough for us to use those different pronouns there as well. That was where the decision came into play for that choice.”

But ScreenRant reported that the decision to categorize non-binary characters as having a “classified” gender got pushback from players after it was announced because it implied that non-binary identity should be kept a secret while male or female identities shouldn’t.

Is Brett Kavanaugh angling to be the next Anthony Kennedy?