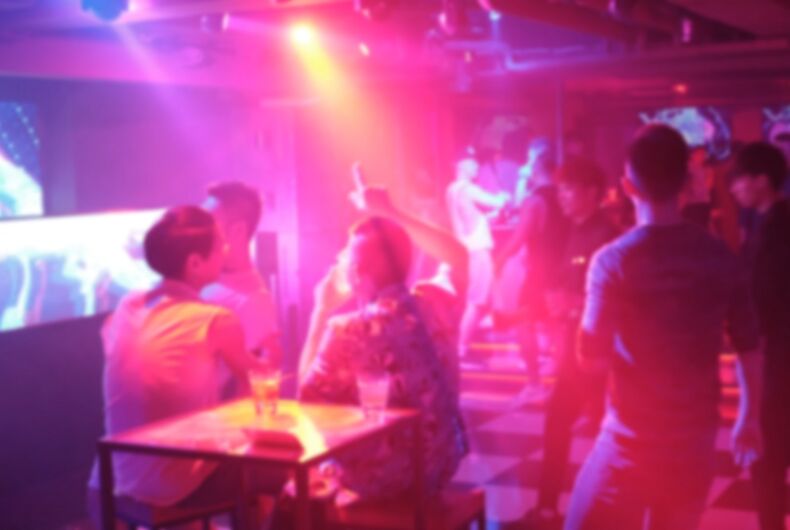 Scene from a gay bar in TaipeiPhoto: Shutterstock

A man posted on a far-right website that he plans to go to an LGBTQ bar tomorrow in order to spread the COVID-19 virus, as well as a church predominantly attended by people of color. But he’s also worried about “get[ting] hit on” at the bars.

Express, an LGBTQ publication in New Zealand, reported that police are taking the threats “extremely seriously.”

The man wrote on a far-right website this past Monday claimed he had “a really sore throat” and couldn’t stop coughing, as well as other symptoms associated with COVID-19.

He said he has the “woohoo flu,” a mocking term that refers to Wuhan, the city in China where COVID-19 was first found, and incorrectly labels the coronavirus a flu.

While express didn’t link the man’s post or copy it in its entirety for fear of spreading hate speech, the website reported that the man planned to “visit gay bars and ethnic churches” in order to spread the virus.

He said that he was going to a gay bar in New Zealand’s largest city, Auckland, this coming Wednesday and hoping to cause “10-20 infections.”

The man also asked people on the website for advice on how to “fit in” at an LGBTQ bar “without risking get hit on.”

He then asked people if it would be “too suspicious” if he went to what express referred to as a “predominately ethnic church.” He complained that the church nearest his home is “predominantly white” and that he would have to drive to another town to find a church with people of color.

Someone notified an Auckland gay bar manager about the post and they contacted express, saying that they were concerned that the man would follow through.

In a statement, police said they are “continuing to make inquiries into an anonymous post made on an online forum on Monday” but refused to comment further on the investigation.

New Zealand has gotten international attention this year for its successful efforts to contain the coronavirus pandemic. The government reported only four new cases in the past 24 hours and said that most cases are from people entering the country.

Is Brett Kavanaugh angling to be the next Anthony Kennedy?