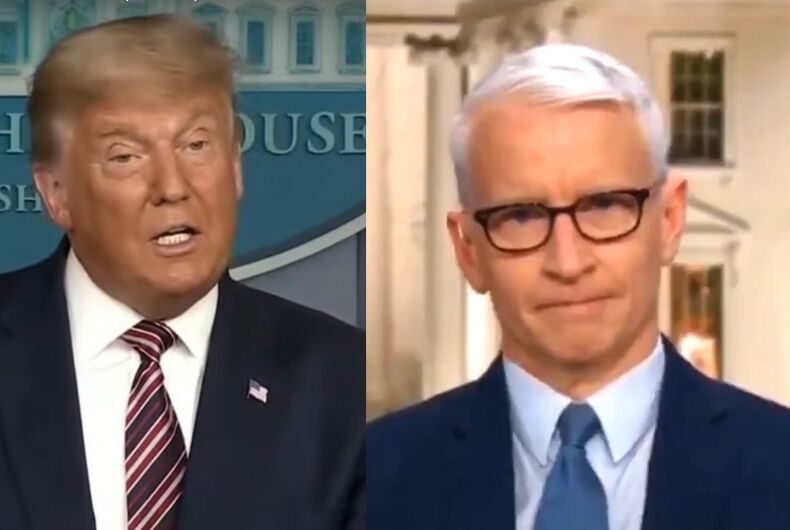 CNN journalist Anderson Cooper had a bizarre way of describing Donald Trump on air last night as more mail-in and absentee ballots continue to be counted.

At a press conference Thursday night, Trump read from a prepared statement, arguing falsely that “if you count the legal votes, I easily win” and accusing “big media, big money, and big tech” of interfering with the election.

“We were winning in all the key locations by a lot actually, and then our numbers started miraculously getting whittled away,” Trump claimed, appearing not to understand that the reason states are counting all the ballots is that the final count may be different from earlier counts.

But commentators noted that, despite his combative words, Trump appeared despondent, rarely looking up from his text or ad-libbing as he usually does.

Cooper was discussing this speech when he found a strange way to describe it: “That is the president of the United States. That is the most powerful person in the world, and we see him like an obese turtle on his back flailing in the hot sun, realizing his time is over.”

“But he just hasn’t accepted it and he wants to take everybody down with him, including this country.”

Cooper: That is the President of the United States. That is the most powerful person in the world and we see him like an obese turtle on his back flailing in the hot sun… pic.twitter.com/0s9x0OqjjH

Is there a journalism Hall of Fame?
This clip should definitely be included, and historians need to mark this point in time and what was being said.

Grade A shade. Anderson has been waiting for years to let this kind of thing rip.

Everyone's finally taking the gloves off. This should have been done a long time ago. We wouldn't still be here if media weren't busy both-siding and normalizing absolutely bizarre behavior for 4 years.

Social media lit up with discussions of whether the comment is fat-shaming.

Trump’s press conference is below.

Angie Craig is the 8th out candidate to win a seat in the U.S. House

Anti-LGBTQ pastor who blamed “fornication” for coronavirus dies of COVID