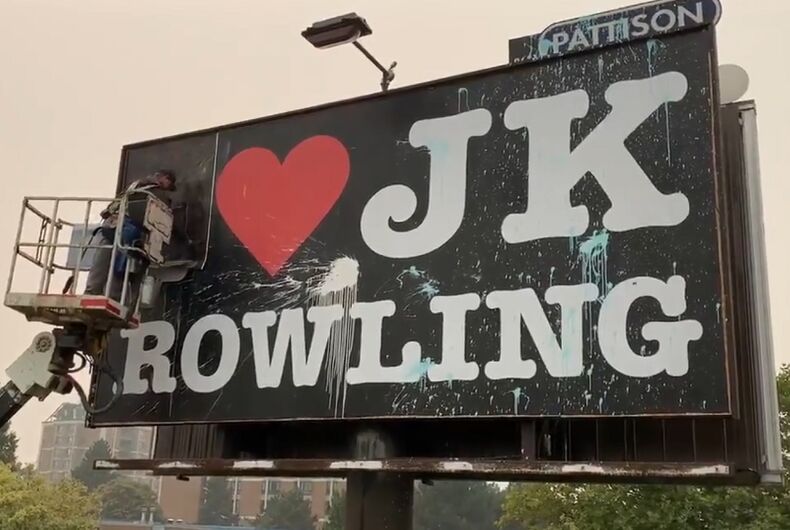 The billboard getting covered upPhoto: Screenshot/Twitter

A man who paid to put up a billboard that said “I ❤️ J.K. Rowling” has been arrested “for antagonizing protestors and even attempting to punch someone,” according to local media.

Last month, the billboard went up in Vancouver, Canada with just a message in support of J.K. Rowling but without any context, leading people to believe that it was meant to support her much-publicized anti-transgender views.

A local elected official called the billboard a “hateful expression,” it was vandalized with paint, and then it was taken down.

Insurance broker Chris Elston took credit for the billboard, saying on Twitter that it was about Rowling’s transphobia, including “issues with self-ID laws, ever-evolving gender ideology, child protection, and women’s rights.”

This past Wednesday, local Green Party candidate Nicola Spurling – who is transgender – held a small campaign event at an intersection when a man wearing a sandwich sign that said “I ❤️ J.K. Rowling” on one side and “Gender ideology does not belong in schools” on the other side approached the group.

That man wasn’t identified, but he promised to show up at another Spurling event the next day.

Spurling posted a video of the man the next day standing in the middle of a crowd and demanding that everyone move back away from him so that they would be six feet away for social distancing. He was not wearing a mask.

Spurling identified him as Elston.

Video footage of Chris Elston trying to push his way through my supporters/volunteers to get to me. Thank you to everyone who helped to keep him away as I was being interviewed. He kept asking for 6 feet yet he would get right up in people's faces with no mask on. pic.twitter.com/m0pGufh3ME

NEWS 1130 reports that a man who was “antagonizing” protestors at a Saturday rally was arrested. The radio station didn’t use Elston’s name, but said that he paid for the billboard last month and who “heckled” Spurling last week.

Vancouver Police said that they warned the man that he would be arrested if he didn’t stop being disruptive multiple times “but he did not listen.” They said that he has since been released and was given a court date.

On Twitter, Elston confirmed that he was arrested but denied that he punched anyone.

A ‘Vancouver Is Awesome’ reporter is talking to me right now, @sarahgrowch, and was at first keen to spread fake news that police said I punched someone.

Police never said any such thing.

In separate other tweets, he claimed that he was the victim of an assault at the protest that he showed up for in his sandwich sign.

I don’t think they could have possibly made the handcuffs any tighter.

I still have marks on my wrist.

All because I was assaulted. Amazing stuff.

Just got out of jail. ❤️

Signs have been seized.

Making the long walk back downtown unless I can find a cab.

He said that he is going to take on the “corrupt police” but did not explain how.

I guess we can add ‘corrupt police’ to the list of groups I have to take on.

▪️Public Figure Meghan Murphy and her followers and her constant lies and efforts at sabotage, because “this is a women’s only issue.”