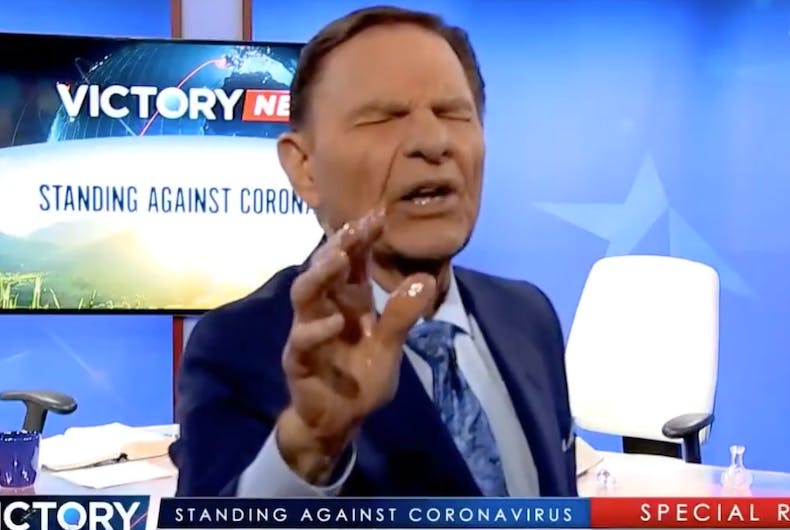 A televangelist is claiming that Donald Trump is “immune” to the COVID-19 virus because of Jesus.

“I was noticing today – President Trump and his beautiful First Lady – without masks,” said Kenneth Copeland, a member of Trump’s Faith Advisory Council.

Instead of pointing out the irresponsibility of walking around in public without masks, Copeland said that it proves that “they are immune.”

“This display of our president giving God thanks for helping in that time – and he walked out immune,” Copeland continued, not explaining why Trump was hospitalized for complications stemming from COVID-19 if he was “immune” all along.

“Glory to God. Woo! Thank you, Jesus. Come on man, we’re immune. We’re going through this thing with a holy spirit immunity from the works of the devil.”

Whether all of the over 225,000 Americans who have died so far from the coronavirus pandemic passed away because they weren’t good enough Christians for God to make them “immune” is left as an exercise for viewers, apparently.

Televangelist Kenneth Copeland declares that Trump is now immune to COVID-19, which is evidence that Christians are immune to the virus. pic.twitter.com/iw77wZaK8m

Kenneth Copeland has been milking the coronavirus pandemic for all it’s worth. Back in March, he claimed he could “cure” people through their televisions.

“Put your hand on that television set,” he said at the time. “Hallelujah. Thank you, Lord Jesus. He received your healing.”

By April, he was telling his followers that the pandemic would be “over much sooner you think” because “Christian people all over this country praying have overwhelmed it.”

“I blow the wind of God on you,” he said, blowing at the camera. “You are destroyed forever, and you’ll never be back. Thank you, God. Let it happen. Cause it to happen.”

His wife Gloria Copeland has been doing this since before the pandemic, too. In 2018, she told her followers not to get a flu shot because “Jesus himself gave us the flu shot.”

In 2013, an outbreak of the measles – which was almost eliminated in the U.S. years ago – was connected to the Copelands’ Eagle Mountain International Church in Texas. Over twenty people caught the disease, and many of them were not vaccinated after receiving what doctors called “bad information” about vaccines at the church.