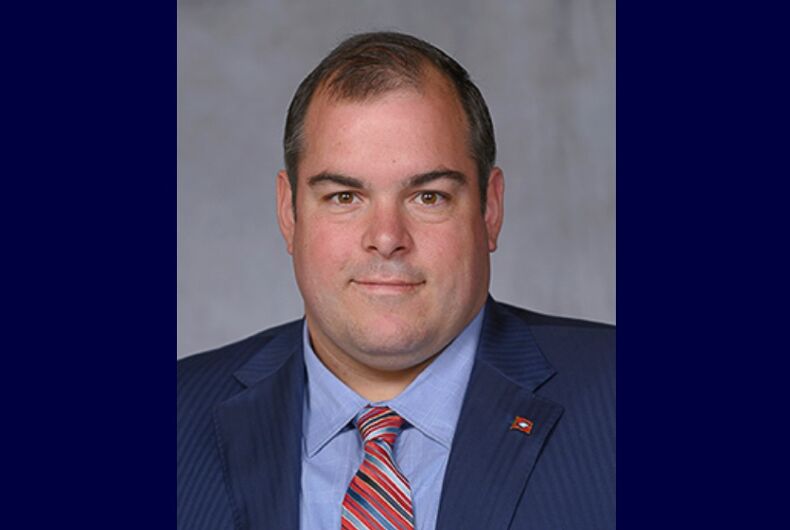 A Republican candidate in Arkansas has apologized for terrorizing classmates – including several Black women – in high school by wearing a KKK outfit.

Charles Beckham III, 37, is challenging state Sen. Bruce Maloch (D) next week and several of his classmates from high school are speaking out about his racism. They say they remember when he dressed up as a Klansman for Halloween in 2000 at the Mississippi School for Mathematics and Science.

“I just remember being petrified to the point of tears,” said Victoria Brown, a Black woman who attended the school with him.

The public high school is located on the Mississippi University for Women campus and had one boys’ dorm and one girls’ dorm at the time. Usually, boys weren’t allowed in the girls’ dorm, but the school had a trick-or-treating tradition and the kids could enter the other genders’ dorms on Halloween.

Brown said that Beckham and two friends appeared that night in 2000 in KKK regalia, and they had a “commanding presence” and didn’t seem like they were joking around. She and other students who witnessed them said that Beckham and his friends weren’t just wearing bedsheets, but actual KKK clothes with insignias.

“Did I see what I just saw?” Brown recalled. “Gee, they just have these [outfits] at home? Do they do this on the weekend?”

“He was serious,” said Alana Nichols, another Black woman in the dorm at the time. She said it didn’t seem like a prank.

Jennifer Leigh Ann Jackson, a white woman who attended the school at the time, said that Beckham and his future wife were seriously into “Rebel pride.”

“This was not some isolated event, like maybe he had a bad moment,” she said.

Another Black woman who attended the school, Safira McGrew, said that both Beckham and his girlfriend at the time had Confederate flags hanging in their dorm rooms.

According to the Arkansas Democrat-Gazette, Beckham called the allegations “not only baseless and false, but disgusting” and said it’s sad “that the Democrats will do anything and say anything to try to win.”

Then the newspaper found more evidence: Beckham was kicked out of the school following the KKK regalia incident, and his parents filed a lawsuit. Records at the Hinds County Circuit Court in Jackson corroborated the classmates’ memories.

The Mississippi Board of Education’s response to the lawsuit says that Beckham and the other students wore T-shirts with fake blood to the school-sponsored Halloween event and then went back to their dorms to change into KKK outfits and terrorize the girls.

“Bubba [the name Beckham went by at the time] further contends that there was no physical or emotional harm caused by his actions,” the response says. “There were several students testifying on behalf of Bubba that stated the costume worn by Bubba was in poor taste or immature, but they felt it was nothing more than a costume.”

A judge dismissed the suit in November 2001 and he finished high school at Pascagoula High School in Mississippi.

“I do sincerely apologize for any angst or grievances that I have caused anyone as a minor, as that is not the man that I am today,” Beckham said after he found out that the Arkansas Democrat-Gazette had found the court papers. “I continue to unequivocally denounce the KKK and any like-minded hate groups and the rumors that I am or have ever been part of the KKK are absolutely ridiculous.”

“I am a Christian, a husband to my loving wife of eight years as well as a father of two and am proud of the life that we have built in McNeil, Arkansas.”

Eric Seymour, a white student who attended the school at the same time as the others and who would later come out as gay, said that about a quarter of the students at the boarding school were Black which “led to an environment where for the first time a lot of students really had to exist in a truly integrated environment.”

But he didn’t defend Beckham’s actions: “Though we were young, I think they knew full well the implications of such, particularly that it’s a tactic of fear and intimidation.”

“When I think about people who would do good as a public servant, he is close to the last person on that list,” Seymour said, explaining that he was bullied by Beckham at the high school.

“He personally terrorized me. That kind of speaks to his character,” he remembered. “He’s a bully. He’s not a nice guy.”