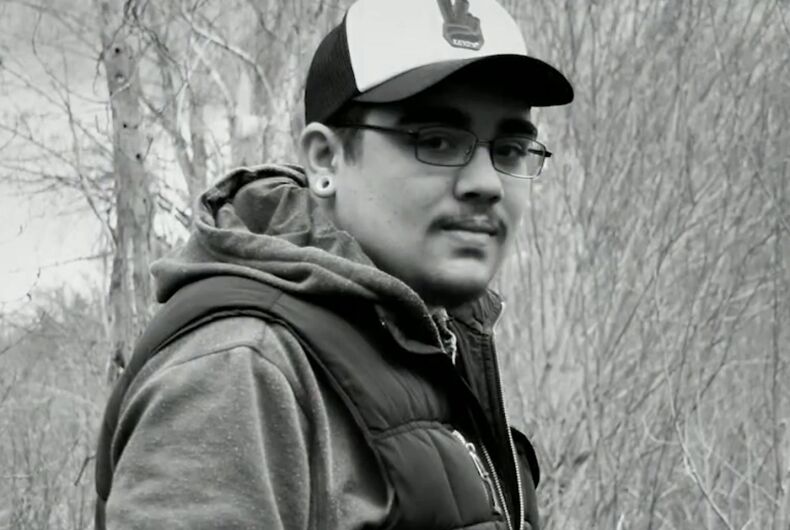 Vandals desecrated a memorial to a slain teen with homophobic slurs, leading his parents to believe that he was killed in a hate crime.

Jason Fox, 19, of Newport, Washington went missing on September 16. His mother drove across the state looking for him, but on October 4 authorities said that his body had been found in Pend Oreille County. Investigators believe that his death was a homicide due to physical evidence, and his parents believe that he was killed in a hate crime.

“I have full good reason to believe, and so do other people, that Jason was killed because he’s gay,” Jason’s mother Pepper Fox told KHQ/Q6 News.

She told KXLY that her son was often bullied for his sexual orientation.

“It didn’t get in the way of loving him,” said Pepper Fox. “I kept telling him, ‘You know what? You’re going to make someone very happy some day, you’re a great companion.’ And he was.”

Jason’s father Michael Fox, who said that his son was bisexual, said that he too believes that Jason was killed in a homophobic hate crime.

“The sad part is I was beginning to feel like he was finally getting in touch with who he was,” the father said.

But as if their grief wasn’t enough at the moment, vandals desecrated a memorial set up for Fox with homophobic slurs.

“His biological mother has been going back there every night and lighting a candle for him,” his father said. And now he’s convinced that his son was killed in a hate crime.

The Pend Oreille Sheriff’s Office said that they won’t discuss an active investigation, but no arrests have been made so far in connection with Fox’s death. Now his father wants the FBI to get involved.

“You could come to Newport and someone would say, ‘Oh I know what happened it was this dude,’ it’s damn near common knowledge at this point,” Michael Fox said.

“It’s very bizarre. I have never asked for anything except for them to do their job and be there to support me as a law-abiding citizen when I need them the most and I don’t feel like that’s happening.”

There is currently a $20,000 award for information leading to an arrest in the case and the Pend Oreille Sheriff’s Office is asking that anyone with information call 509-447-3151.

In the meantime, Fox’s parents are grieving his death at a young age.

“And he was comfortable with himself,” Michael Fox said. “He had finally admitted it to us a long time ago. The only thing we can say is we’ve known for a long time. It doesn’t matter at all, son. It’s best for your mental health that you’re not hiding this, but it matters not to us.”

Historical photos of men in love: Meeting in the middle