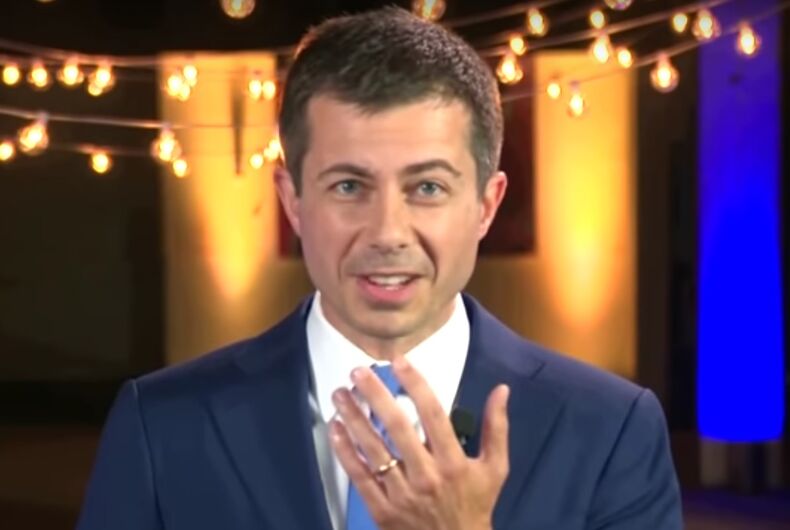 In a tweet that has since been shared over 46,200 times, Buttigieg wrote, “Just imagine turning on the TV, seeing your president, and feeling your blood pressure go down instead of up.”

Related: Chasten Buttigieg’s new book is a frank discussion of growing up gay in middle America

His tweet was a reference to the dueling televised townhalls between Trump and Democratic presidential nominee Joe Biden.

Buttigieg’s tweet, which has also racked up over 40,000 retweets and over 300,000 likes since he posted it yesterday evening, is just the latest instance of his newly assumed election season role as Biden’s attack dog, a role he seems to savor.

Just imagine turning on the TV, seeing your president, and feeling your blood pressure go down instead of up.

When asked recently by MSNBC about allegations that Trump privately informed his friends to make financial investments for the coming epidemic while publicly downplaying its dangerousness to the American people, Buttigieg said, “The president comes from a world where he lives in a building with his name on it, and he doesn’t care how this is gonna affect everyday people. He doesn’t care, certainly, how it’s gonna affect people living in poverty. So as long as he can figure out a way to make sure that his wealthiest friends do well, he’s happy.”

Buttigieg made similar comments about Pence on Fox News the day of the actual vice presidential debate, much to the displeasure of the Fox News hosts.

On Monday, Buttigieg shredded Barrett’s defense of “originalism,” a legal approach that conservatives subscribe to with the intention to interpret constitutional law based on its original meaning from 1787.

Editor’s Note: This article previously stated that originalism interprets the U.S. Constitution as it was written “in the 1800s.” The Constitution was originally written and adopted in 1787, with some amendments written in the 1800s. We regret the error.

Historical photos of men in love: America’s love affair with the automobile