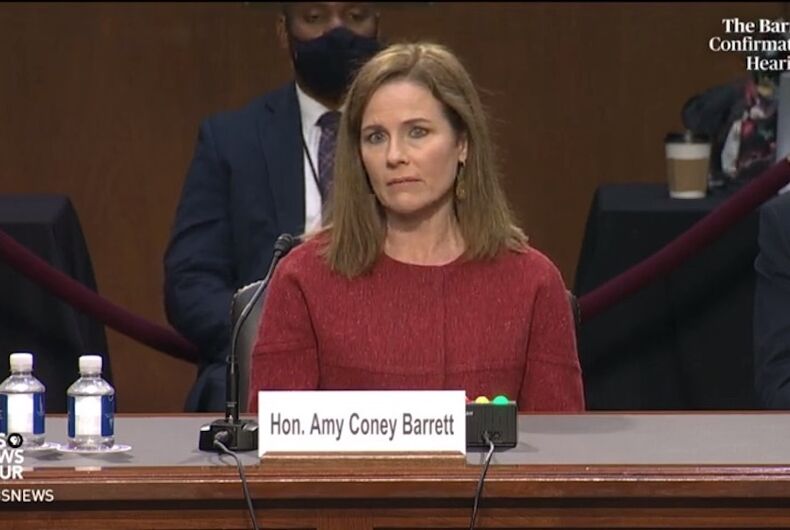 Like all Supreme Court nominees, Amy Coney Barrett is very good about not revealing her legal biases during her confirmation hearing. To hear Barrett tell it, she’s just a legal scholar who has no set views on anything other than the sanctity of the Constitution (as it was written in 1787).

Of course, that pose is a fiction. And nowhere is that clearer than when it comes to LGBTQ issues. In response to questions from Senator Dianne Feinstein about protecting marriage equality, Barrett simply refused to answer, saying, “I’m not going to express a view” on whether she follows the late Justice Antonin Scalia’s reasoning that marriage equality violates the Founders’ intent.

But in doing so, Barrett made a slip that tells you everything you need to know about her views of LGBTQ people.

To say “sexual preference” is an outdated term doesn’t do it justice. It’s an offensive dog whistle used decades ago by the right to suggest that being LGBTQ isn’t innate but rather a choice that can be changed. GLAAD calls the phrase “offensive,” and media arbiters such as the Associated Press and The New York Times ban its use for just that reason.

Only the right-wing holds onto the phrase, refusing to use “sexual orientation.” “Sexual preference” is the phrase that someone steeped in the right’s rhetoric would use.

Barrett’s use of the phrase is a window into her view of LGBTQ issues.

Alliance Defending Freedom, the hate group battling marriage equality, bandies the phrase around liberally. It’s no surprise that Barrett has her own ties to ADF.

Barrett could spare us the fiction of being a neutral legal observer. She’s anything but. Unfortunately, she’s headed to the highest court in the land, where she can reveal her inner Scalia for decades to come.

Feinstein asks Barrett if she agrees with Scalia's criticism of the same-sex marriage ruling. Barrett says she won't express her views. She then notes she would not discriminate based on "sexual preference," an offensive term that suggests sexuality is a choice, which it is not.

"Sexual preference," a term used by Justice Barrett, is offensive and outdated. The term implies sexuality is a choice. It is not. News organizations should not repeat Justice Barrett's words without providing that important context.