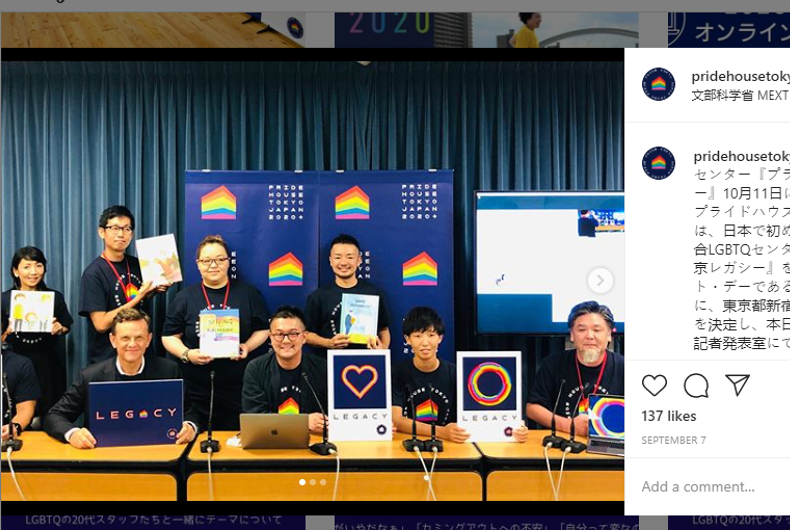 Pride House Tokyo, the first permanent LGBTQ center ever established in the five-island nation, opened this Sunday, intentionally on International Coming Out Day.

The Pride House – also entitled “Tokyo Legacy” – was created in partnership with Japanese authorities and Pride House International, in hopes of “taking advantage” of the upcoming 2020 Summer Olympics and Paralympics, postponed until summer 2021.

Their opening was an official part of the 2020 Tokyo Olympics’ Programme, making it the first “Pride House” officially recognized by the International Olympics Committee.

“In sport, we are all equal…we therefore welcome that Tokyo 2020 has embedded diversity and inclusion in the Olympic Games model,” IOC President Thomas Bach said in a statement.

Similar centers were temporarily opened in or near the Olympic villages in host cities Vancouver and London during the 2010 and 2012 Olympics. Requests to open a Pride House or LGBTQ venue in Sochi, Russia, was denied before the 2014 Winter Olympics there. Protests against anti-LGBTQ laws in Russia were also banned, before being rescinded right before the games commenced.

Russia’s decision spurred the people behind the effort, who instead opened one at the 2014 Commonwealth Games in Glasgow, Scotland. They were then “motivated to organize an international network” which became Pride House International in 2015.

Since, Pride Houses have opened at the 2016 Olympic Games in Rio, 2018 Winter Olympics in PyeongChang, and several other sports events such as FIFA tournaments and the PanAmerican Games.

Tokyo is the biggest metropolitan area in the world with a population of over 32 million people in the region. Its new center is bought together by a consortium of “35 [non-profit organizations] and activists, 14 corporations, 19 embassies in Tokyo, many athletes and sports professionals” that will contribute to operating the Pride House, in order to “create a safe and secure place to broadcast information on and by the LGBTQ community.”

It was initially planned to open in 2021, a year after the Olympics game was initially scheduled, but a survey of the LGBTQ community spurred organizers to open ahead of time.

“This need is particularly relevant as we look to live with the pandemic in the mid to long term,” they added.

Pride House Tokyo already revealed plans for advocating for the LGBTQ community in the leadup to, during, and after the Olympics take place next summer. They will also serve as the home to “LGBTQ Community Archives,” another first in Japan. They received “nominal support” from the United States embassy, among other countries, and
“special support” from the Netherlands delegation in Japan.

Following Sochi, the Olympics pledged to offer support for LGBTQ communities, even stipulating that host cities chosen after 2014 pledge not to pass any similar laws if they are chosen as the home for the coveted ceremonies. Tokyo was chosen by the IOC in 2013, but they are continuing the pro-LGBTQ traditions regardless.

Despite that pledge, the IOC recently awarded host duties to the 2023 European Games – a sub-Olympic event – to Krakow, Poland. The region is one of many that has declared itself an “LGBTQ-free zone” under Poland’s anti-LGBTQ government.

LGBTQ rights are complicated in Japan. While they are generally regarded as one of the most supportive countries in Asia, they are the only one of the G7 countries that does not recognize same-sex marriage or unions.

Trans people have certain limited protections – such as when Japanese courts shot down bathroom bans last year – but in order to officially change their gender and/or name, they have to be single, with no children under the age of 20, medically transitioned, and sterilized. Courts also upheld those laws last year, despite international condemnation of the sterilization standard.

Homosexuality has been legal since 1880. Recently, a prefecture district even made it illegal to out an LGBTQ person, but while Japanese LGBTQ people don’t face “widespread religious stigma”, same-sex couples still face discrimination in everyday life, such as lack of housing and visiting privileges at hospitals, as AFP reports.

LGBTQ Nation found that homophobia in Japan frequently stems from sociocultural pressure to get married and have kids that will carry on the family lineage, as opposed to religious expectations. Still, 54 percent of Japanese citizens believe that homosexuality should be socially accepted as of 2013.

But several LGBTQ people and athletes have hope that the center can bring progress to Japan, as they outlined in an opening video message.