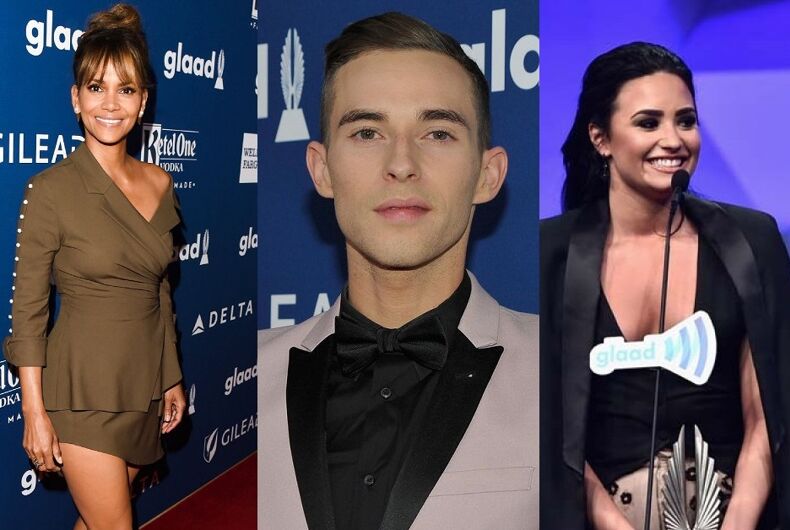 Halle Berry, Adam Rippon, and Demi Lovato have recorded phone calls to get people from their home states to vote in support of LGBTQ equality.

Part of GLAAD’s effort to get people to vote in the upcoming election, the three messages from the queer and ally celebrities will be played over the phone and direct people to a webpage with information on how to vote.

Related: Information about where to register to vote, voting deadlines and important info for LGBTQ Voters

One of the calls is from out gay Olympian Adam Rippon, which will be played for people in his home state of Pennsylvania, where Biden currently has a small lead over Trump.

“So much is on the line for my LGBTQ+ friends: marriage equality, adoption, the safety and dignity of transgender Americans, racial justice,” he said.

Grammy-nominated out bi musician Demi Lovato’s call will be played for people in Texas, where Trump has a four-point lead over Biden.

She told LGBTQ and ally voters in the Lone Star State that early voting is already open.

Oscar-winning actor Halle Berry’s call will be played for people in her home state of Ohio, a battleground state where Joe Biden and Donald Trump are neck-and-neck in the polls.

“I’m a proud LGBTQ ally working with GLAAD in my home state of Ohio to make sure Ohio has the highest turnout of LGBTQ and ally voters in history this election year,” Halle Barry says in the call, explaining that early voting is open in the state and encouraging Ohioans to get the polls now.

Ohio, Texas, and Pennsylvania hold 76 electoral votes out of the 270 needed for either Biden or Trump to be elected; just winning those three battleground states would represent 28% of the votes needed to win.

So it’s little wonder celebrities and organizations are putting resources into getting out the vote in those states.

“It is so important for every member of the LGBTQ community to be engaged in this election cycle,” said GLAAD’s Ross Murray. “Voting is essential, but we want people to go beyond, helping friends, family, and local media understand what is at stake this election for the community.”

Amy Coney Barrett was a trustee at a school that bans LGBTQ people, because of course she was