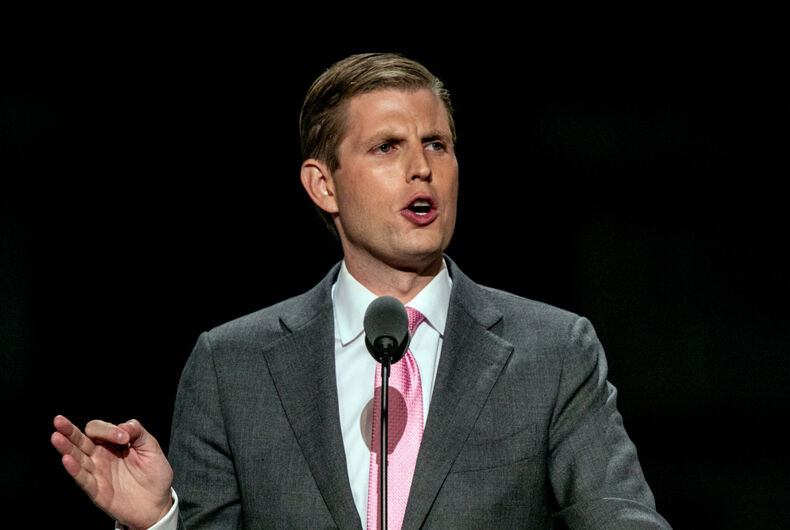 This time, he’s let loose with a claim so wild it would be unbelievable that he said it… if he wasn’t Eric Trump. He says his daddy “literally saved Christianity.”

During an interview with a North Dakota radio station, Trump started rattling off a list of his father’s accomplishments in office, when he hit on the topic of religion. It ranked in between the Second Amendment and peace in the Middle East.

“He’s literally saved Christianity,” Trump claimed. “I mean, there’s a full-out war on faith in this country from the other side. I mean, the Democratic party, the far-left has become the party of the quote-unquote atheists. They wanna attack Christianity. They wanna close churches. They wanna, you know, they’re totally fine keeping liquor stores open, but they want to close churches all over the country.”

It should be noted that, like Christmas, there isn’t a war on Christianity. The president hasn’t brought peace to the Middle East. No one tried to take away guns either.

Last week, several sources who worked with Donald Trump during his time as a businessman, candidate, and president, confirmed that he regularly mocks evangelical Christians, Jews, and Mormons.

During the lead-up to the election, then-candidate Trump held a meeting at Trump Tower with evangelical leaders who wanted to bless his campaign. They “laid hands” on the president, physically touching him while praying in a blessing that serves as part of their religious beliefs.

Here's the audio of Eric Trump listing "he literally saved Christianity" as one of his father's accomplishments in office. pic.twitter.com/uJG6YUPAbq