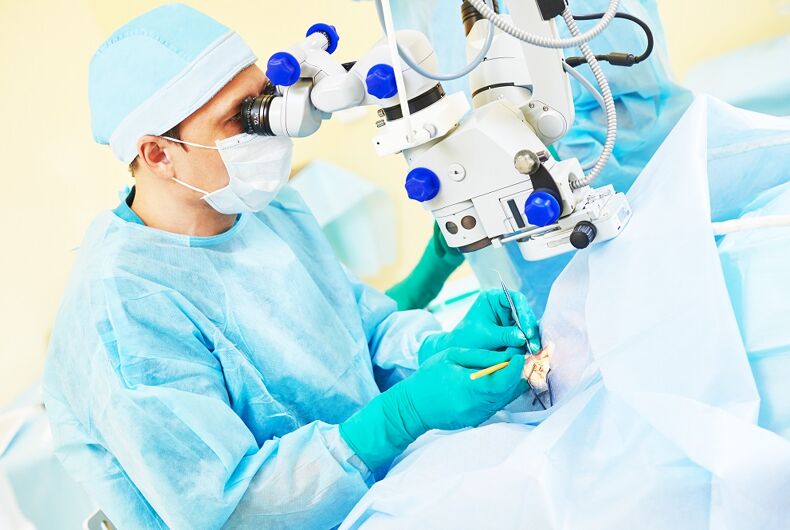 While the LGBTQ community is well aware of the FDA’s ban on blood donation by any man who has had sex with another man in past three months, few people are aware there is a separate ban 20 times as long for gay and bisexual donors of eye tissue.

Some forms of blindness can be cured with a corneal transplant surgery using cornea tissue that is recovered from the eyes of a deceased donor. However, federal regulations in the U.S. and Canada severely restrict the ability of sexually active gay and bisexual men to donate their eye tissue when they die.

These bans caused the loss of an estimated 1558 to 3217 corneal donations from gay and bisexual men in 2018, according to a new study published on September 24 in the medical journal JAMA Ophthalmology. With millions of people across the world in need of corneal transplant surgery, these discarded corneas from gay and bisexual men could have been used to safely restore vision to thousands of blind patients.

The U.S. Food and Drug Administration’s ban on corneal donation by men who have sex with men was established in May 1994 out of concern that HIV rates were disproportionately high in that population.

At the time, HIV tests were unreliable up to six months after someone was exposed to HIV. Since then, however, HIV testing has become faster and increasingly reliable, with modern HIV tests now able to diagnose an HIV infection as soon as four to eight days after a person is infected with the virus.

All corneal donors in the U.S. are required to undergo three separate HIV tests. Despite the advances in HIV testing since 1994, the FDA continues to require gay and bisexual corneal donors to have been abstinent for five years, even if all three HIV tests are negative.

The U.S. and Canada are outliers when it comes to restricting corneal donations from gay and bisexual men. Many countries, including Spain, Italy, Mexico, Chile, and Argentina, allow gay and bisexual men to donate their eye tissue just as easily as heterosexual donors.

Despite improvements in the reliability and efficiency of HIV tests, restrictive federal policies for cornea donations have not changed, even as similar limits on blood donation have been relaxed.

Prior to 2015, gay and bisexual men in the U.S. were subject to a lifetime ban on blood donation. In 2015 though, the FDA concluded that a lifetime ban was no longer scientifically justified and subsequently recommended that gay and bisexual blood donors must be abstinent for 12 months. Then in April 2020, the FDA announced that blood donors should be deferred for only three months in cases when a man had sexual contact with another man.

Dr. Michael A. Puente is an assistant professor of ophthalmology at the University of Colorado School of Medicine. He is lead author of the above-mentioned research study published in JAMA Ophthalmology.

With just two words, Amy Coney Barrett revealed how biased she is against LGBTQ people