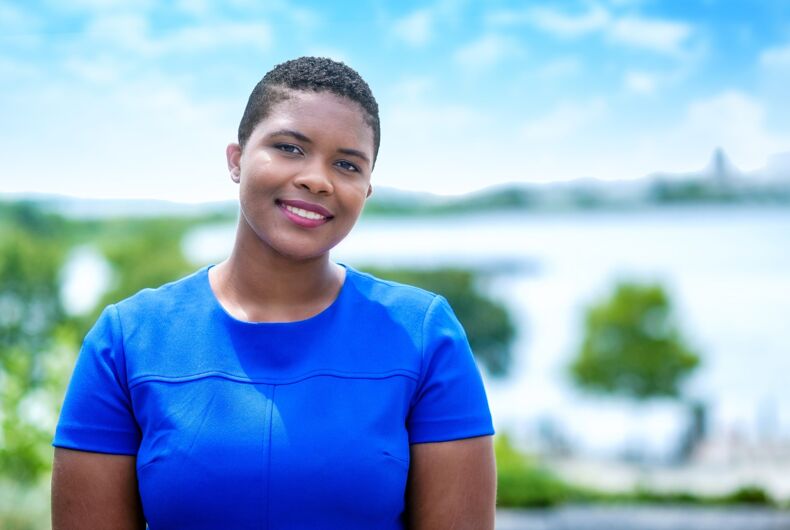 Democratic Rhode Island Senator Tiara Mack is one of many new, out lawmakers in the U.S. Photo: Benjamin Branchaud

Tiara Mack is ready to take on the Rhode Island Senate.

An activist and educator born in South Carolina, the 26-year-old had a challenge on her hands. To get on the ballot in the general election, she first had to win the primary against longtime Democrat seatholder Harold Metts, who has held the position in District 6 since 2005 and is known for being vehemently anti-LGBTQ.

“The most important thing was knocking on doors,” Mack told LGBTQ Nation. “I really was concerned or worried, I didn’t know how introducing yourself as a Black queer woman as the first sentence that comes out of your mouth would resonate.”

Luckily for Mack, most people did respond positively to that news. “Most people were like, ‘oh wow, this is the change we need,'” she said. She explained how it felt empowering to state all of her identities and have the folks in District 6 connect with her. It made her feel like she had a real chance of beating Metts.

“[Winning the primary] was a really really great feeling,” she shared.

Mack decided to run for Rhode Island Senate in part to increase representation for the communities she is part of. “I was very cautiously optimistic,” she said. “Because I was hardworking, knocked on every single door during a global pandemic, got down to the nitty gritty…and building a team that would help me do the rest made me feel confident.”

Originally from the South – raised in both Columbia, S.C. and Atlanta, GA – Mack fell in love with Rhode Island while studying at Brown University, playing on their women’s rugby team. She was one of the first women named to the Inaugural All-American Class honors for her sport her senior year.

She has been working with Rhode Island youth ever since moving — first teaching sex education, then working as a recruiter for teachers — with the goal of making sure students were being taught by those with similar backgrounds to themselves.

Now, she’s a Youth Organizer and is also on the Board of Women’s Health and Education Fund, as well as the Board of the East Side/Mt. Hope YMCA. She also interned in Public Policy and Advocacy at Planned Parenthood.

“Being a longtime activist in my community and working on the history making Reproductive Privacy Act legislation,” she says, discussing the 2019 law that codifies Roe v. Wade and cements Rhode Island’s commitment to reproductive rights, “seeing that there weren’t many people in the statehouse who looked like me, who had stories like mine, who were fighting for people in the community who looked like me…

“I thought, why not run, and bring those stories — not just as an advocate, but bring them as a policymaker.”

On her website, she tells the story of her childhood, when her family lived paycheck to paycheck and she felt isolated by her identities: “I thought I was the only Black person in all my classes because I was smart, and not because the education system pushes Black and brown students into lower level classes or into the prison system. I thought I was different because there was no LGBTQ+ representation in books or my school, but later realized LGBTQ+ voices and identities were silenced.”

She continues, “I grew up thinking we were broke because we were unlucky, not because there are systems in place that prevent minimum wage workers from being able to live off of a single income. I thought everyone had great schools, and not just broke Black kids that lived on the outskirts of rich communities. I thought everyone signed an abstinence pledge in the sixth grade. I later understood that it was my right to learn about my body and all my health care choices. I grew up thinking doctors were only for rich people and when you were sick, you went to the emergency room. I later realized health care access and affordability was the issue.”

Now only challenged by an independent, she may likely become the first Black LGBTQ state senator in the history of the state – which is still known fully as the “State of Rhode Island and Providence Plantations.”

Now, among her biggest priorities in the Senate are housing, criminal justice reform, and a livable minimum wage. Rhode Island’s state Green New Deal is also crucial to her.

In the final month before the election, Mack says she has been thinking about strong leadership. “Our legislators have not really met during this pandemic,” she explains.

“The biggest thing that’s on the top of [my] mind for me is having leaders who are going to be bold and explain that we cannot sit back and watch our society and our world and our communities fall apart during a global pandemic. We have [to have] some people who are not just planning to work this fiscal year. We have to have people who are planning for the next five years, the next ten years, with people-centered policies.”

Above all, Mack wants voters to know she is just a regular person. “I love donuts, I play rugby, and I spend way too much time on Instagram. I think that’s one of the most relatable things and the most real things about my campaign.”

Mack isn’t pretending to have everything figured out, either. “I didn’t go out saying I have all the answers. I didn’t go out saying I have all these credentials and I know exactly what needs to be done,” she explains. “But I came in with and still have a real authenticity. I want to work with the community. I don’t want to be the voice for just one group and I want people to challenge me and invite me into those difficult conversations and I’m not going to lie and pretend I know more than I do.”