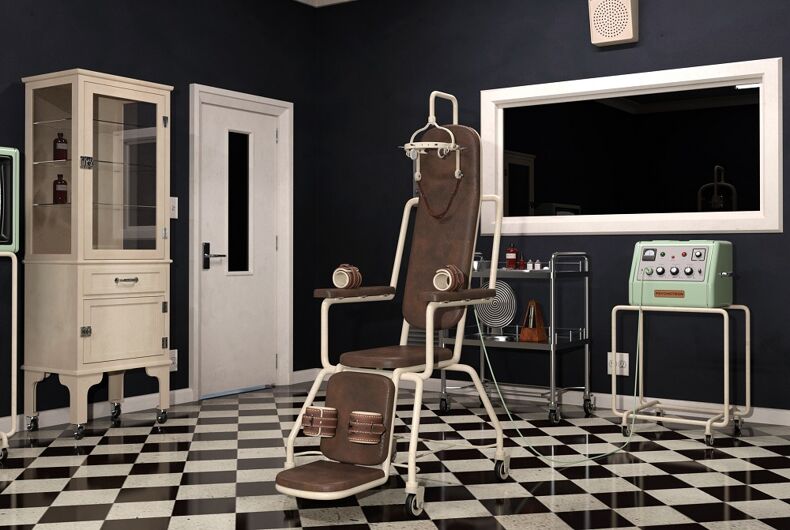 A lesbian is speaking out about 12 years of imprisonment in a hospital, forced medication, and over 200 electroconvulsive therapy treatments because of her sexuality.

Joan Bellingham, 67, is one of many survivors telling their stories as part of a national inquiry in New Zealand into abuse in state and faith-based care facilities from 1950 to 2000, and she said the abuse started because she wouldn’t hide her sexual orientation.

“I have been gay for as long as I can remember,” Bellingham said, according to the Ontago Daily Times. “I never thought of it as something I needed to hide away.”

Bellingham said that she was told from a young age that she should be more ashamed of herself. Teachers would leave comments on her work about how she has “another thing coming” if she goes into nursing and a tutor “told me homosexuality was wrong, said I wasn’t normal. She said I was depressed and messed up in the head.”

She was a nurse trainee at the Burwood Hospital in Christchurch when she was 18-years-old in 1970. She said that she was bullied by others at the hospital and people spread rumors about her because she was “very open about” about her sexual orientation. The rumors turned vicious, as she was accused of stealing medication.

She was taken to the Princess Margaret Hospital one day when she was at work: “I didn’t have my clothes with me or anything. I had no choice in the matter.”

Over the next 12 years, she would be in and out of that hospital, getting admitted 24 times. She was diagnosed with a “neurotic personality disorder” and given drugs to “quieten me down” when she said that she didn’t belong in the hospital. She was later diagnosed with schizophrenia.

Bellingham said that her parents weren’t any help since they saw doctors as authorities who were “like gods.”

During this time, no one would listen to her. Bellingham said that she was given a variety of drugs but never told what they were or what the side effects were. Doctors’ notes from the hospital showed that she was sometimes given three times the recommended dosage of drugs.

She was also forced to undergo electroconvulsive therapy over 200 times. Medical staff would give her a muscle relaxant and she would lose control of her body. Her hands were put in boiling water so that staff could find her veins.

The treatments “felt like razor blades going through my body,” she recounted. “There was no regular pattern. Sometimes it would happen twice a day.”

In a 2012 interview, she said, “It was the most awful pain you could imagine. It went from the top of my head, down my neck and all the way down my back. I was often awake when they put the electrodes on but the first wave would knock me out.”

She said that the treatments made her temporarily blind sometimes and she would throw up and get dizzy.

“I would vomit and cry and beg them not to do it again.”

Bellingham said that the treatments left her with permanent scars on her head that hairdressers still notice today.

She was also given laxatives and forced to undergo enemas at the hospital.

Time blurred for her and she says she has forgotten parts of her 20s due to the treatments. She started having suicidal thoughts.

Throughout this time, her sexual orientation remained a key factor in her continued abuse. Medical staff would ask her questions about her sexuality, like “How many times a week do you have sex with your partner?”

She left the hospital in 1982 and they never followed up on her. In 1984, she stopped taken the medication she was given and she said her life “dramatically improved” after that.

In 2000, she was diagnosed with Hepatitis C, which she believes she contracted at the hospital.

Her general practitioner, who she got after leaving the hospital, said later that in the 25 years he treated her, she “never exhibited any sign of mental disorder.”

Bellingham has tried to hold the state care system responsible in the decades after she was released. In 1987, she received $11,500 for the burns on her head and chronic headaches she was left with.

But even then she was told that the burns may have been caused by cigarettes.

“I felt like I would never be believed,” she said.

In 2012, she received $4000 in a “wellness payment” in 2012 after she tried to get compensated for the years of abuse. The government also paid a fraction of her legal fees.

She said that she is speaking out because “my hope is that no one has to go through what I went through.”

Bellingham never finished her nursing training and instead got a job at a retirement home.

Having migraines? It might be because you’re gay or bisexual