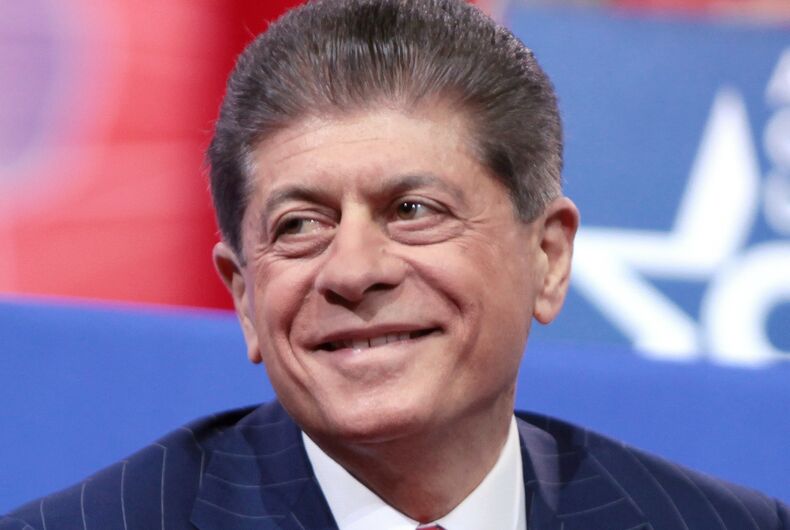 A second man has come forward with a claim of sexual misconduct and attempted sexual assault against Andrew Napolitano, a Fox News analyst and former New Jersey Superior Court judge.

Earlier this month, Charles Corbishley filed a federal civil lawsuit against Napolitano, claiming that he was forced by the then judge to perform oral sex in 1988 while he was a defendant on Napolitano’s docket. Since then, Corbishley alleges that Napolitano has attempted to leverage law enforcement connections to keep him quiet.

“These accusations are completely false, full stop,” Napolitano said in a statement at the time. His current employer, Fox News, also came to his defense, and he’s remained on the air in the three weeks since. Napolitano even filed a countersuit, claiming that the allegation amounts to defamation.

The new accusation comes from another lawsuit that seeks $15 million in damages, filed in the New Jersey Superior Court – where Napolitano once presided over cases.

Kruzelnick describes when he first met Napolitano in December 2014, as a waiter at the Mohawk House steakhouse in Sparta, New Jersey. Kruzelnick, who was around 20 years younger than Napolitano’s age at the time of 64, had worked at the restaurant since 2005.

Kruzelnick explains he saw Napolitano as “more of a father figure than anything else… a brilliant man [that he] enjoyed speaking with,” but that he “did not want anything more than that to develop between them.” That changed when Napolitano allegedly followed him into a bathroom and groped him from behind, saying “you are just so hot.”

Kruzelnick “immediately” pushed Napolitano away, asked him not to touch him again, and expressed that he did not have any sexual interest in him. The pundit became a regular at the steakhouse in the following months, specifically requesting Kruzelnick on each visit.

But Napolitano stopped making direct advances at the waiter, and Kruzelnick was “okay with their friendship… as long as [he] respected these boundaries.” Soon, he came to “genuinely enjoy” conversations on “life, politics, and world events” with the former judge.

That’s when Napolitano allegedly committed what the lawsuit called a “bizarre sexual act” one night in early September 2015. Kruzelnick accepted an invitation to the Judge’s home – with “mixed feelings” – believing that he could “control the situation.”

After “casual banter” ensued and Kruzelnick sat on a couch in the living room, Napolitano entered with his “pants were down, and his penis was fully erect and exposed.” Napolitano then allegedly “threw himself” in Kruzelnick’s lap, goading him to “start slapping me really hard” while Napolitano masturbated. His suit also notes that Napolitano asked to be called “son” while being spanked, referring to Kruzelnick as “daddy.”

Fearing that he would lose his job of 10 years, Kruzelnick kept these alleged acts to himself while Napolitano returned to the steakhouse weekend after weekend, still making sexual advances. When Kruzelnick was the victim of homophobic harassment from his boss – who would, among other things, call him “faggot” and “gay boy” in front of his coworkers – he “decided to ask” Napolitano for legal advice on the matter.

Kruzelnick believed Napolitano could help because the former judge had bragged about having “fixed cases,” “people sent away,” and “gotten people off.” So he accepted Napolitano’s invitation to his house again in November 2015. Kruzelnick alleges that Napolitano tried to initiate the same sexual acts as before in exchange for his help. After he obliged, Napolitano further pledged to help out Kruzelnick’s brother, Dallas, with unrelated criminal charges.

Napolitano met with the two brothers after eating at a different restaurant in 2016, where he allegedly told Dallas that he would continue to assist him “only if your brother gives me his full cooperation,” which the Kruzelnick says referred to the previously coerced acts. Fearing his brother would end up in jail, he felt “humiliated, degraded and abused… he was powerless to stop the abuse,” his suit claims.

This continued into 2017, when Napolitano invited the waiter and an unnamed Fox News intern to his home.

The abuse culminated with a visit to Napolitano’s home in August 2017, when the former judge attempted to “rape and sodomize” him as he changed into swimming trunks. From there, Kruzelnick was “noticeably” different to friends and peers, and refused to serve the judge at work or see him again.

Napolitano denied the allegations from what he called a “copycat lawsuit” that was “filed and promoted publicly by the same lawyers” that Corbishley had hired.

Napolitano was on Fox News as recently as this past Monday, discussing the nomination of Judge Amy Coney Barrett for the Supreme Court. Napolitano once claimed that he was on Donald Trump’s shortlist for a seat on the Supreme Court, but Trump has denied that.