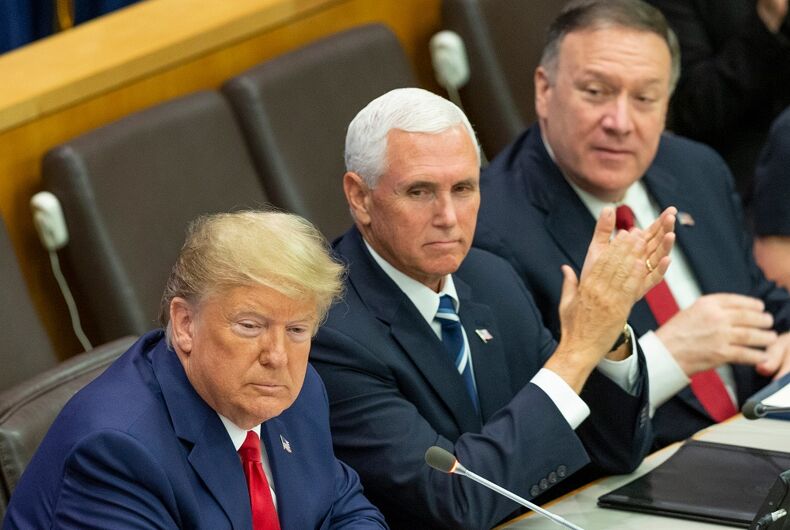 The Trump administration brought its proposal to redefine international human rights – and de-emphasize LGBTQ rights in favor of “religious freedom” – to the United Nations this week and released a list of 57 countries that have joined its statement that says that some human rights are more important than others.

The 57 countries supporting the U.S. proposal include governments that have been accused of human rights abuses like Saudi Arabia and Egypt, and authoritarian governments that oppose LGBTQ rights, like Hungary and Poland. More pro-LGBTQ countries like France, the U.K., and Germany have not signed on with the Trump administration proposal.

Related: Donald Trump called out for “sham” campaign to help gays in other countries

“Authoritarianism almost always follows the oppression of religion,” Secretary of State Mike Pompeo said on Tuesday in an interview with Tony Perkins, president of the SPLC designated hate group Family Research Council. “Pushing religion out of the public square drives oppression, drives authoritarian regimes, and really gets at human dignity.”

In a speech at a U.S.-sponsored event at the U.N. General Assembly yesterday, Pompeo said that “the international human rights project is in crisis,” in part because “many multinational organizations have lost their way, focusing on partisan policy preferences while failing to defend fundamental rights” and said that human rights are threatened by “novel rights.”

“Partisan policy preferences” is similar to expressions the Trump administration has previously used in this context to refer to marriage equality and anti-discrimination laws.

The European Union urged it’s member states not to attend the speech to indicate their support for civil rights.

One European diplomat told the Washington Post that the Trump administration is “cherry picking” certain rights over others and criticized the U.S. event at the U.N. as not “hugely interactive.”

“If you made it too interactive, it could get embarrassing,” the diplomat said.

Last year, Pompeo announced the creation of a new Commission on Unalienable Rights, which he said would reimagine human rights because “words like ‘rights’ can be used for good or evil.”

The commission was stacked with anti-LGBTQ and Christian conservative activists, and even resulted in a lawsuit that accused the State Department of developing “an alternative definition of human rights” that excludes women and LGBTQ people, “likely in violation of the United States’ treaty obligations.”

A draft statement was released this past July by the commission that mentions “religion” or religious freedom 43 times but didn’t mention LGBTQ people at all outside of labeling marriage equality and anti-discrimination measures “divisive social and political controversies.”

“The U.S. government cannot unilaterally redefine which human rights will be respected and which will be ignored,” said Tarah Demant of Amnesty International USA said at the time.

“The U.S. Commission on Unalienable Rights is a deeply misguided enterprise with the potential to undermine human rights protections that governments find disagreeable,” said Louis Charbonneau, the U.N. director for Human Rights Watch. “The commission promotes the false premise that too many people, particularly lesbian, gay, bisexual, and transgender people and women, are asserting their rights.”