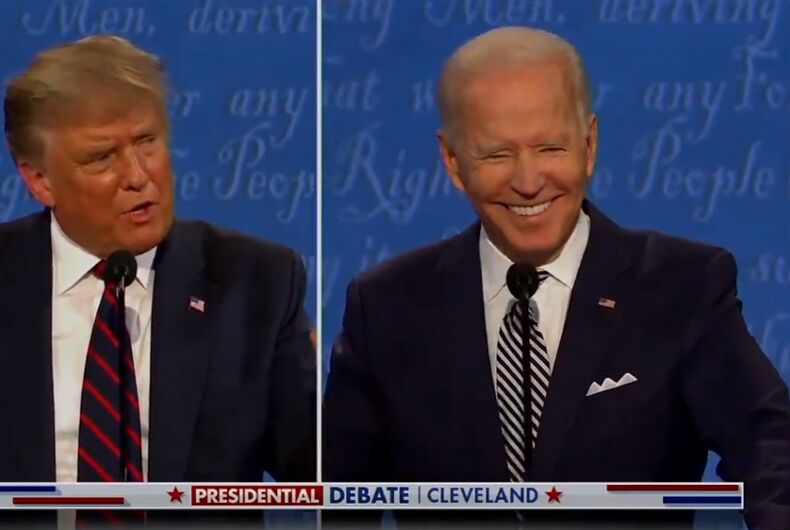 Last night’s presidential debate was unsettling, and it wasn’t the lack of hope offered — something expected of presidential debates — that was most demoralizing. It was the manner it all unfolded; it was an assault on the senses.

The exchange was toxic masculinity amplified and under a spotlight. It was like worrying while listening to a neighbors’ heated dispute, except this was audible, but somehow more difficult to follow than a muffled argument next door.

No single point was fully conveyed. Instead, the debate was a series of loud, meaningless snippets that, for those who’ve endured the stifling verbal assaults of an oppressive partner, friend, or family member, revived bad memories.

Donald Trump reminds me of every terrible argument I have had with a man, where they talk over you, and just yell point after point while cutting you off, to knock you off kilter, while being loud and wrong.

“Donald Trump reminds me of every terrible argument I have had with a man, where they talk over you, and just yell point after point while cutting you off, to knock you off-kilter, while being loud and wrong,” she tweeted.

Trump obviously led this parade of male ego, for sure—but Biden joined. He took the bait. He shouted back, and then Trump yelled some more. Save for anxiety or a headache, viewers got very little actual information about either candidate’s plans from that debate.

Post-debate takes abound today that neither candidate, but instead toxic masculinity, was last night’s winner. Who lost? Everyone else, of course, including the people of the U.S., and particularly marginalized folks. The latter are the most negatively affected by our country’s broken system, and neither candidate fully expressed how it could be repaired.

Even Trump’s refusal to condemn white supremacy—which on its own is disgusting enough—is actually closely connected to misogyny; cishet men desperate to assert their own masculinity comprise much of the alt-right.

There is a certain kind of white male who loves it though. They eat up the toxic masculinity bullshit, think belligerence makes Trump seem more manly.

“There is a certain kind of white male who loves it though. They eat up the toxic masculinity bullshit, think belligerence makes Trump seem more manly,” Elizabeth Spiers tweeted.

CNN published its debate results this morning: Biden won, according to six in 10 watchers. Those polled were asked to decide which candidate gave more truthful answers and whose plans for the country were better. But how could anyone decide?

The two cut each other off so often it was like the debate stream was buffering. Except it wasn’t.

Trump’s strategy going into the debate was likely exactly as we saw it unfold: to derail Biden from the beginning. It worked.

Telling a misogynist to “shut up,” as the former Vice President attempted, rarely works. For women and femmes, a move like that can mean violent repercussions.

But to adopt the same stereotypically super-male, chest-inflated posturing to match his toxic opponent—which was how Biden chose, probably in a frantic attempt to prove wrong the “Sleepy Joe” caricature Trump has drawn—is a mistake. More toxic masculinity to stop toxic masculinity doesn’t work, either.

14 countries ban being transgender. That’s just the tip of the iceberg.