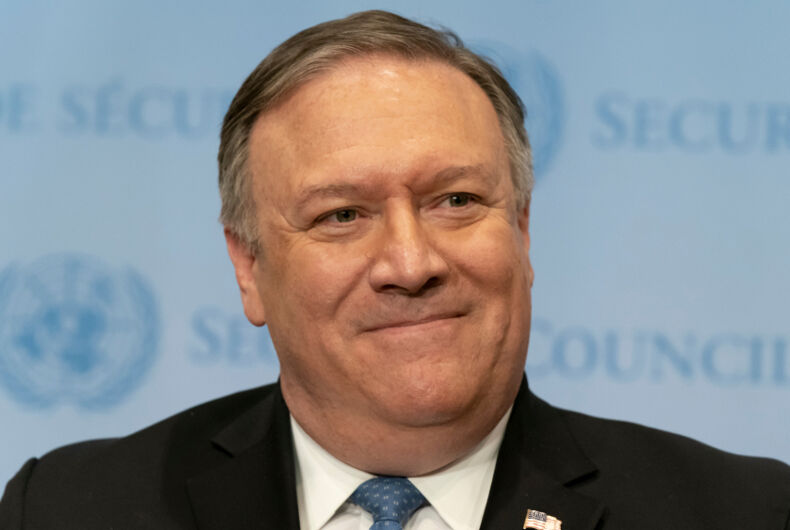 U.S. Secretary of State Mike Pompeo is expected to present an anti-LGBTQ report from his so-called Commission on Unalienable Rights to the United Nations’ (UN) General Assembly at two upcoming events.

The U.S. ambassador to the U.N. office in Geneva, the chair of Pompeo’s commission, and its secretary staff are presenting the report to the international diplomatic community at a September 16 virtual event and again at a later event.

Mother Jones writes that human rights organizations such as Amnesty International, Equity Forward, and Human Rights Watch worry that the report could be used to undermine LGBTQ equality and reproductive rights internationally. The organizations have been e-mailing foreign diplomats to reject both the report and its associated events.

The report, which was unveiled on July 16, lists same-sex marriage as one of several “divisive social and political controversies” along with abortion and affirmative action. It also declares religious freedom as above other human rights, which is troubling since religion is often used to justify anti-LGBTQ laws.

The commission itself is stacked with anti-LGBTQ and Christian conservative activists, and even resulted in a lawsuit that accused the State Department of developing “an alternative definition of human rights” that excludes women and LGBTQ people, “likely in violation of the United States’ treaty obligations.”

The report declares that there’s an “overuse of rights language” applied to “political preference” and, as such, the U.S. needs to create a “hierarchy of human rights.” Or, to use Pompeo’s own words when unveiling the report, “Many [human rights] are worth defending in light of our founding; others aren’t.”

The report states, “The idea that there are different classes of humanity with different privileges and immunities dies hard.” It also claims that non-government human rights groups are just un-democratic elites looking to push their values on other countries:

“At the same time, the widespread proliferation of non-legal standards — drawn up by commissions and committees, bodies of independent experts, NGOs, special rapporteurs, etc., with scant democratic oversight — gives rise to serious concerns. These sorts of claims frequently privilege the participation of self-appointed elites, lack widespread democratic support, and fail to benefit from the give-and-take of negotiated provisions among the nation-states that would be subject to them.”

The document also seems to take issue with court victories that have helped secure LGBTQ rights:

“The temptation to cloak a contestable political preference in the mantle of human rights, which are held to be objectively and universally true, and seek a final and binding judgment from a court, tends to choke off democratic debate, which is itself critical to self-government and therefore to the protection of unalienable rights.”

While sexual orientation and gender identity are not yet explicitly listed in the U.N. Declaration of Human Rights, the document does list “sex” and “other status” as categories of people entitled to be free of “any discrimination [and] to equal protection of the law.”

Pompeo’s report remains very much in line with the State Department’s anti-LGBTQ aims under his leadership. In July 2018, Pompeo led a three-day U.S. Ministerial to Advance Religious Freedom which sought “to combat religious persecution and discrimination” by funding anti-LGBTQ hate groups. At the event, it was declared that America will no longer pressure African nations to repeal their anti-LGBTQ laws because such doing so “discourages Christian values.”

These pundits have represented the queer community in mainstream media. Which one did it best?

Sarah McBride is set to be the first transgender state senator in the U.S. after primary win