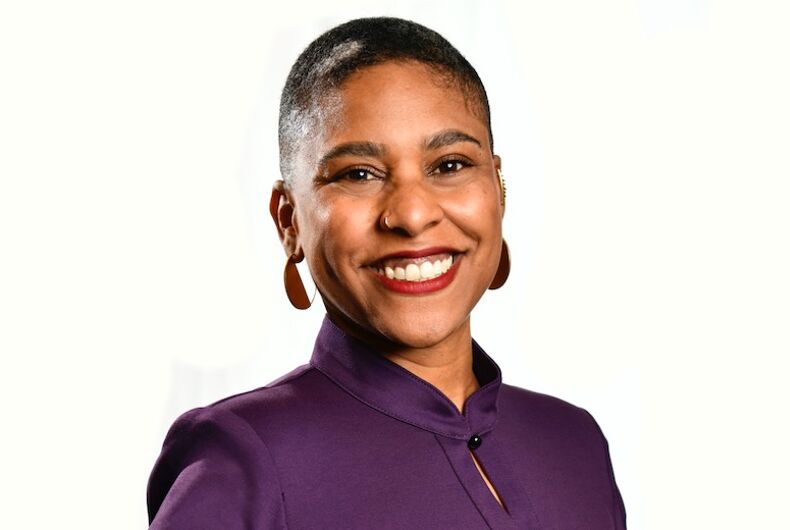 Kierra Johnson, the next Executive Director of the LGBTQ Task ForcePhoto: Todd Franson

Founded in 1973, The Task Force is dedicated to education, research, and advocacy work and is known for campaigns like Queer the Census. It also hosts the annual Creating Change Conference.

“I couldn’t be more thrilled and excited to take on this role,” Johnson told LGBTQ Nation in an exclusive interview done before the announcement went public.

Originally from Georgia, Johnson has been with the Task Force for almost three years, first as a member of the Board of Directors and its National Action Council and now as Deputy Executive Director. Before she joined the organization, she was the Executive Director of URGE—Unite for Reproductive & Gender Equity.

She is excited, she said, to lead the Task Force into its next chapter – and she also knows it will be a big undertaking.

“We, like many organizations right now, are in the process of figuring out what it means to serve our community in the middle of a pandemic, in the middle of an economic downturn, and in the middle of a crisis of overt and covert racism, and I think at the center of that is focusing on racial equity as part of our work even more deeply,” she said.

She feels emotional, she added, about the fact that amidst all of this, she will also be the first Black person to lead the organization.

“I come from a long line of Black women leaders and advocates and organizers and freedom fighters, and I want to do that legacy proud,” Johnson said. “I want to make my people proud in every sense of the word, and I know it’s going to be a challenge. Everything about being out loud at this time as a Black woman comes with risk, and I’m up for the challenge, and I know I’m not doing it alone.”

“Not only do I have the support of my own colleagues and the board of directors at the Task Force, but the support of all my communities,” she continued. “Black folks across social justice sectors. Women who have been deep in the work for over twenty years in women’s rights and abortion rights work, so I know I’m really going to lean on those folks.”

“And I do understand the weight of carrying this forward, and I don’t claim to do it alone. I don’t want to, I don’t need to, and the best can only come from working in collaboration with folks across our community.”

In February, when she officially takes on the role, Johnson hopes to begin deepening relationships between the Task Force and other activists and leaders beyond the LGBTQ community.

“That’s how the movement is growing. That’s how activists are working. They’re not siloed,” Johnson said. “I want to be a ‘household name’ across social justice movements, so really [focus on] building those relationships.”

As we approach the November 3rd election, she added, it is even more crucial to spread the message that LGBTQ rights are inextricably entwined with other movements.

“The reality is all of our wants and dreams and needs are wrapped up in political power,” she posited. “A lot of the work the Task Force does is explain that the issues that affect everyday people affect queer people.”

“I want to center the experiences and knowledge and magic of women of color. Period,” she said.  “You’ve got Breonna Taylor, and then you think about Ruth Bader Ginsburg, and then you think about the fact that Betsy DeVos is withholding millions of dollars from a school district because they will not deny trans young people participating in organized sports, and for me, the connection is clear: control of bodies.”

“It is the control of our sexuality. It is the assumptions that some people get to make about our identities and then place judgments on whether or not we should live or die or experience joy.”

“So [I plan on] being intentional about raising the profile of women of color and putting the spotlight on the unique ways disenfranchisement and oppression looks,” she continued. “I think we can come up with some new creative, impactful solutions that will actually benefit all of us.”

In keeping with the Task Force’s Queer the Vote campaign, Johnson also hopes to continue to do work around voting and elections.

“It’s not just about how we do the electoral work up to election day, but the work we have to do to build a base and fortify, educate, strengthen, and train our constituents to hold it down in between elections. [This means] holding elected officials accountable, being engaged in policy battles, proactively and defensively,” Johnson said. “Really deepening our democracy work is where I want to go.”

At home with her kids throughout the pandemic, Johnson added that taking on the new position will be a challenge.

“This is a big position, and I’ve got kids at home every day doing school work. It’s one of those challenges, how can we rethink what leadership means in this time where there are 4 or 5 people sitting at home all at the same time trying to live their lives in a not-normal time?”

Another big challenge, she said, will be to decipher what it means to address racial justice and white supremacy within the organization itself.

“In left of center movements and left of center organizations, it is a really difficult thing for people left of center to be able to see and own their own role in perpetuating white supremacy and racism,” she explained. “I fully expect that to be a challenge to figure out how as an organization we navigate that both internally and externally and how I do that as an executive director.”

Johnson is excited about the team she will have to help her, though.

“I feel so lucky to be in cahoots with all of them and that I don’t have to hold it all,” she said. “It’s one of the fastest ways leaders burn out, is when they are literally alone or they have a perception of being alone, and I don’t feel alone, so it’s just reminding myself I can and should continue to lean on these brilliant people that are surrounding me, and that feels really good.”

Above all else, Johnson said, she wants those engaged with the organization to know that she is headed into the position with a bridge-building mindset and that she is ready to roll up her sleeves and do the work.

“I’m in it to win it. Take me to a red state. Take me to the Bible belt, take me to the rust belt, [or] sweet home Alabama, I am down. Let’s do this,” she ended. “I am ready to be a bridge in whatever way, and I want to bring together the not so usual suspects in a powerful way to leverage power for our communities. We deserve it, and we need it.”

What’s it like to be visibly bisexual? It’s others constantly telling you who you are