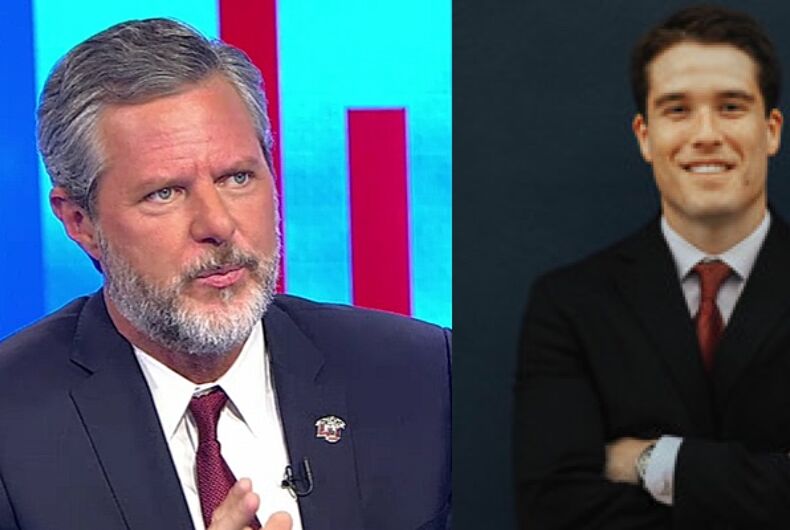 Giancarlo Granda, the former hotel pool attendant who says he was in a years-long sexual relationship with Becki Falwell and Jerry Falwell Jr. – is now saying that the former head of the evangelical Liberty University has been “relentlessly harassing” him since news broke about their alleged trysts.

Falwell went on leave from Liberty last month after years of gaffes, sex scandals, and allegedly creating a toxic workplace, and within weeks he blamed his fall from grace on an affair his wife Becki Falwell had with Granda. He has since resigned entirely.

That same day, Granda came forward saying that the Falwells made sexual advances towards him when he was 20-years-old and they were around 50-years-old. Granda said that Falwell was a consenting participant in the sexual relationship. Falwell soon resigned.

The Falwells have denied the three-way relationship despite emails and text messages Granda saved that appear to show that Jerry Falwell was well aware of what was going on.  Now Granda said that the Falwells have been harassing him non-stop ever since.

“I was afraid for a long time and was constantly reminded by the Falwells of how they would come after me if I spoke the truth, which is why it took so long to speak up,” Granda told Fox News, adding that the famous evangelicals “have been relentlessly harassing me and people close to me.”

He said that Becki Falwell first approached him in 2012. Granda said he was talking with women his age at the hotel he worked at in Miami when she came up to him and said: “Those girls don’t know what they’re doing, you need someone with more experience.”

He said that led to an eight-year-long relationship that ended badly over a business deal involving a hotel. He said that the Falwells flew him in their private jet and took him on vacation.

“They treated me like a part of the family,” he said.

Falwell took over Liberty University in 2007 after the death of his father, Moral Majority co-founder Jerry Falwell Sr., one of the most powerful evangelical leaders in the U.S. in the late 20th century.

Granda said that people who worked at Liberty put Falwell on a pedestal.

“Everyone at Liberty University treated the Falwells like a royal family,” he said. “Faculty, the Board, legal team and friends within the trusted ‘inner circle’ all looked the other way out of fear.”

The school was the subject of a long Politico expose in 2019, where staffers accused Falwell of abusing his power in both sexual and financial matters and acting like the ultra-conservative Christian school’s rules – which forbid the consumption of alcohol even by students over 21, ban “social dancing,” and don’t allow students to socialize with the opposite sex after dark – didn’t apply to him.

“All he wanted to talk about was how he would nail his wife, how she couldn’t handle [his penis size], and stuff of that sort,” one former official said, with other officials saying he was “very, very vocal” about his sex life and would send sexual images of his wife to male subordinates.

Granda now says that he is “not shocked” by Falwell’s “attempt to shift the blame to someone else” when the evangelical leader said his many scandals were a result of an affair his wife had with Granda.

“Jerry and Becki’s version is false,” Granda said. Falwell “was aware of our relationship from day one.”

“Jerry is incapable of accepting responsibility for his actions.”

The Falwells did not comment on the Fox News story.

Yesterday, Reuters published a story about former Donald Trump lawyer Michael Cohen’s allegations that he helped suppress “racy” pictures of Becki Falwell that Granda was blackmailing the Falwells with. Cohen said that he called in that “favor” to get Jerry Falwell Jr. to support Trump’s presidential bid in 2016 in order to shore up support with white evangelical voters.

Jerry Falwell Jr. denied that story and told Reuters in a phone interview that he simply “believed that a businessman needed to run this country.”

Reuters said that Becki Falwell urged her husband to stop talking to their reporter. “Hang up the goddamn phone,” she said. “Hang up the phone, Jerry!”

US Marine who murdered a transgender woman was just pardoned