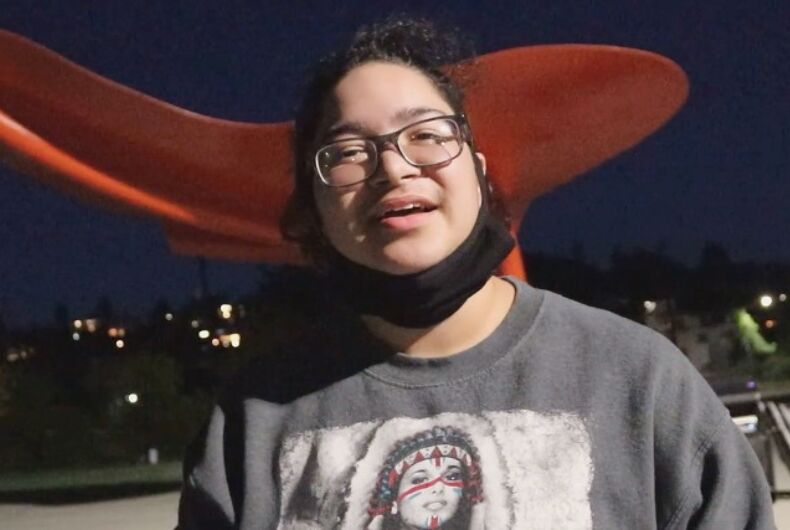 Elliot Chafetz, the transgender cousin of Jacob Blake — an unarmed Black father in Kenosha, Wisconsin who police shot at seven times in the back — has been receiving death threats after he mentioned that he is trans during a public August 27 speech about police brutality and systemic racism.

After his speech, which took place at Seattle City Hall and was live-streamed on social media, he saw that he had received transphobic insults and death threats from viewers in the video’s comments.

Related: Christian fundraising website has raised $270,000 for the Kenosha shooter

When Chafetz got home after the rally, he took a look at the video itself and scrolled over to the real-time comments where he could see what people wrote while he was speaking.

“A lot of people, when I introduced myself as a trans male, they said, ‘Trans male?!! What the fuck is that? There’s no such thing. Nobody’s ever truthful when they’re saying that they’re trans,'” Chafetz said.

“There were several death threats as well saying that they wish I was protesting where they were because they would shoot me upon sight, or ‘If I were there, I’d kick him in his balls,’ which, funnily enough, I don’t have those yet.”

He said that the comments bothered his mother very much, but that he himself has grown up in a generation that expects negative comments on social media. He said the comments didn’t make him doubt himself but rather doubt a nation that’s so resistant to being educated on trans issues without feeling like it’s some sort of political agenda.

Chafetz believes such haters will keep saying such hateful things, but adds that they are “on the wrong side of history.”