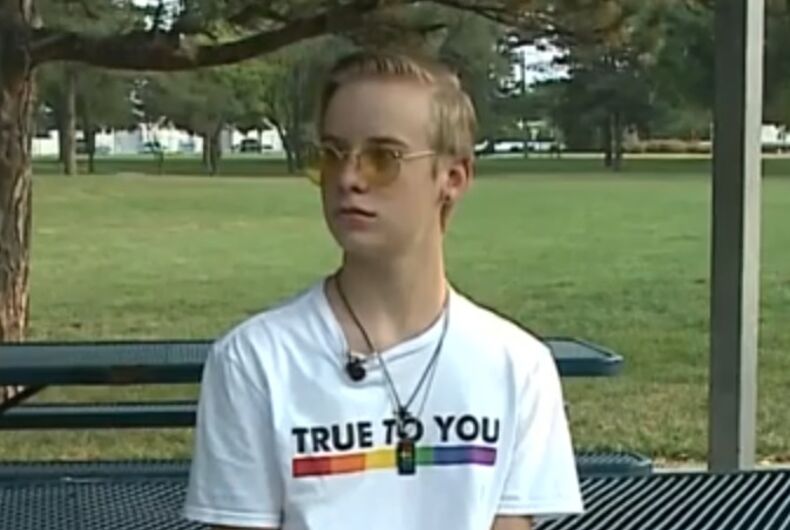 Gabriel in the shirt that got him kicked out of the church's music group.Photo: Screenshot/KETV 7

A gay teen was kicked out of his supposedly “inclusive” church when he wore Pride gear. But an even bigger part of his community rallied together to make him feel included.

Gabriel is a 13-year-old eighth grader in Lincoln, Nebraska. He played piano at church every Sunday with a music group, calling himself “a proud member of the church.”

Related: This neighborhood rallied together to thwart a Christian message of hate

“But then the elders of the church found out I was wearing pride gear,” he said.

The issue? A white T-shirt with a small rainbow on it that said, “True to you.”

That’s when things changed at the church. Gabriel was forced to step away from the music group.

“They told me, since I’m a leader, they wouldn’t want me promoting things that they’re against,” he said, probably referring to being gay.

His mother, Colleen, told KETV 7 News that she was surprised that the church reacted this way, saying that they describe themselves as inclusive and welcoming.

So she shared the story on Facebook, and it got attention: “It only took a matter of hours. It got really big, really fast.”

She didn’t share the name of the church, though, because she wanted to keep the story positive. And she got “overwhelmingly positive” responses.

“Ryan and Ben, a couple about to get married sent a real nice letter,” Colleen said, going through the mail her family has gotten as a result of the story.

“I am a teacher and I have students who love and look up to me,” read another letter. “Sometimes it’s kids like you that need to teach grownups a thing or two.”

Frank Roark, who owns a printing shop in Lincoln, saw the story and made 500 cards that said, “Love is never wrong” on them, a reference to Melissa Etheridge lyrics. He posted about them on Facebook and gave them to people who wanted to send Gabriel supportive messages.

“There’s a lot of good in the world and there’s a little bit of bad in the world,” Gabriel said he has learned from the incident. “But when the bad comes, the good comes too.”