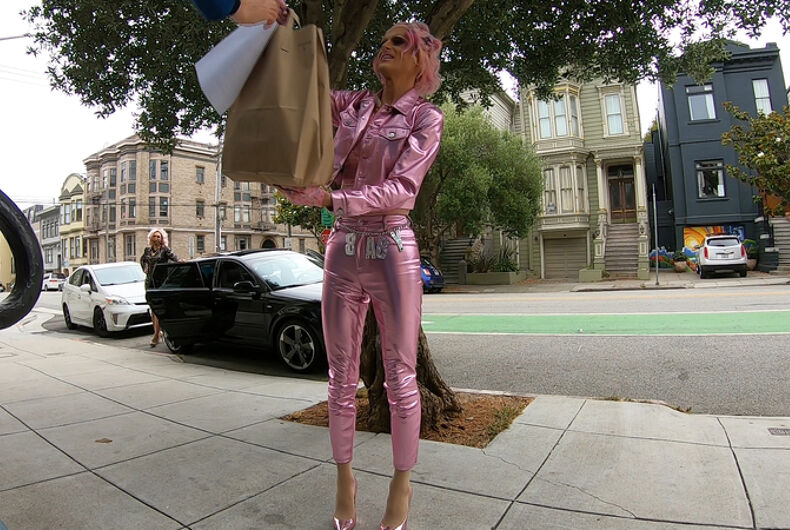 Imagine – the food you ordered is finally arriving. You open your door and are presented your order – to the tune of your favorite Janet Jackson or Cher song, lip-synced by your favorite drag queen.

That’s exactly what drag/cabaret club Oasis offers the people of San Francisco. Being unable to host events since the start of the coronavirus pandemic, the club has had to fight from losing the internationally-acclaimed business located in the SoMa district of the Golden Gate City. They had to try everything – which led to the creation of “Meals on Heels,” a service delivering home-made meals to patron’s doors, offered by Oasis’ rotation of drag performers.

Owner D’Arcy Drollinger initially produced the service as a one-night event in June, and it has continued on every Friday since – and they’re now expanding into Thursdays. Oasis works with Martha Avenue Home Cooked Meals, a joint operation by a couple, actor/director Cindy Goldfield and executive chef Willi Nordby. Many of their menu options are sealed in a mason jar and come with serving instructions, so they can be prepared or cooked later on.

Entrees currently start at $20, and packages (which include dinner, drinks, and dessert for 2) start at $95. A minimum of $50 ensures a show with your delivery, tipping encouraged. Orders can be made for pick up, too, if customers don’t want to bring a show to their neighbors and front doors – although that’s the best part, for most.

Oasis estimates that four or five performers make over 12 food & performance deliveries each day across the rough, hilly terrain of San Francisco, according to the Washington Post. The success of Meals on Heels has allowed Drollinger to keep the club operating, but he also is glad to provide something that “kind of bring some normalcy back to people’s lives.”

“They get to see a drag queen like the used to in the old days,” he jokes.

Meals on Heels is rolling back through San Francisco this Friday! Make your reservation for dinner, drinks, and drag at your door TODAY, before your chance blows away just like Roxy's tip money!! https://t.co/VjwoSpKZrB pic.twitter.com/isJiQIkJNa

Outside of Meals on Heels, Drollinger has tried other methods of surviving this “queerantine”, especially following two of his co-owners bowing out of running Oasis. Drollinger, a world-recognized performer and director in his own right, had to resist his initial desire to walk away from the club as well.

Now, he produces a weekly parody web series on Oasis’ YouTube channel, OasisTV, and other exclusive content on their Patreon for a subscription as low as $4.99. Those methods haven’t been easy, either, with YouTube censoring some of Oasis’ videos recently.

But Meals on Heels has not only caught on, but bought them attention and support from across the country.

Renowned drag performers Matti Bautista, Kochina Rude, Roxy Cotten Candy, and former co-owner Heklina have helped out with Meals on Heels. Many of them are grateful for an opportunity to work, but also for the opportunity to express themselves. Martha Avenue is also experiencing its best business period working with Oasis. One customer described the experience to ABC as “Fantastic…I’ve never had food delivered like that!”

“Like any good drag queen or king knows, if your zipper breaks right before your entrance or the DJ loses your music,” Drollinger wrote recently, “you have a choice: You can either give up, go home and call it a night, or you can put some duct tape on, find a song you don’t know that well and go out there and sell the number.”

While Oasis has recently reopened in accordance to city guidance, they expect it to be a while before they can gain the earnings they used to regularly receive.

See more on how Meals on Heels works in the Associated Press video below, and if you’re in the San Francisco area, consider ordering on an upcoming Thursday or Friday.

Vote now for this year’s LGBTQ Heroes. Who do you believe is making the world a better place?

Who’s your Newsmaker of the Year?