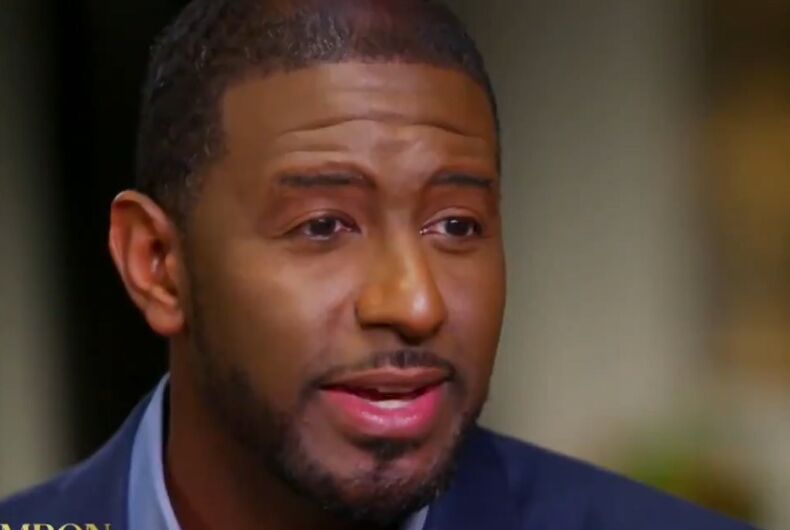 Andrew Gillum, the Democratic rising star who ran for governor of Florida in 2018, just came out as bisexual.

“You didn’t ask the question, you put it out there of whether I identify as gay,” he said told Tamron Hall in an interview that airs today. “The answer is I don’t identify as gay but I do identify as bisexual. And that is something that I’ve never shared publicly before.”

Gillum is the former mayor of Tallahassee and was seen as a progressive due to his support for expanding Medicaid, removing Confederate statues, ending ICE, and increasing corporate taxes and the minimum wage.

“His victory would have been a major advance for LGBTQ rights in Florida,” wrote LGBTQ Nation‘s John Gallagher after his 2018 loss.

Earlier this year, Gillum was found inebriated and vomiting in a Miami Beach hotel room with two other men and what officers believed was crystal meth. One of the other men – who was identified in the media as a sex worker – overdosed in the hotel room.

Gillum, who has three kids with his wife R. Jai Gillum, said that he was just in Miami for a “wedding celebration” and that he didn’t take meth, he just got drunk that night. He said that his electoral loss in 2018 drove him to alcoholism and that he would be going into rehab.

“So many people just don’t understand bisexuality,” R. Jai said in the interview with Hall, according to Out. “Bisexuality is just something different. I just believe that love and sexuality exist on a spectrum.”

“All I care about is what’s between us and what agreement we make.”