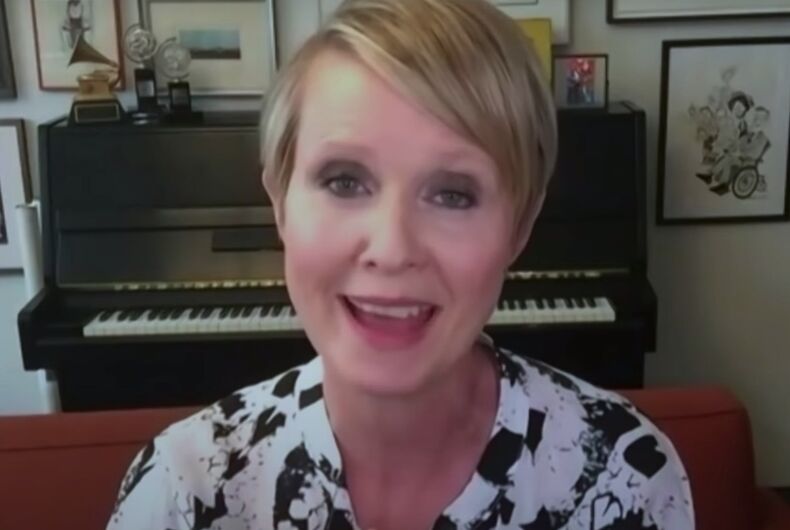 On Wednesday night, bisexual actress and activist Cynthia Nixon mentioned to late night talk show host Seth Meyers how the recent protests and political actions of the Black Lives Matter movement have reminded her of the HIV/AIDS movement from the 1980s and ’90s.

Nixon, a lifelong New York City native, talked about the two movements in comparing the current crises to previous times of upheaval.

Related: Cynthia Nixon just announced that her son is transgender

“I feel like the same way, Black Lives Matter protesters have taken to the streets and are completely changing our world, I feel like that is what AIDS activists did and what LGBT people did in founding ACT-UP, taking to the streets, disrupting traffic,” she said.

“Because similarly, you know, there was an epidemic going on in their community that the rest of the world seemed basically unaware of,” she continued, “and in order to seize the world’s attention and demand an enormous change, that’s what LGBT people did then and that’s what you know so many Black Lives Matter protesters are doing now.”

Meyers then turned to politics, asking Nixon about her unsuccessful 2018 campaign to become New York’s governor. Meyers noted that her campaign espoused progressive values that have since become more part of the political mainstream.

Nixon described how New York state has changed since her 2018 run, citing that Democrats retook the state senate and have been able to pass environmental and bail reforms. They also made it easier to change gender markers on driver’s licenses and passed the Gender Expression Non-Discrimination Act, Nixon explained, following years of preventative efforts by Republicans.

Nixon also touched on her op-ed in the New York Times, describing how vastly inadequate she believes the preparations in NYC Schools to be, especially in comparison to the city’s film & TV industry. “I just keep having this thought,” she told Meyers, “starting on Monday, the only restaurant you can eat at, indoors, without a mask on…is a New York City school.”

Nixon then talked about her role in Ryan Murphy’s 1950s psychological drama Ratched, which tells the origin story of the antagonist from Ken Kesey’s 1962 novel One Flew Over the Cuckoo’s Nest. In the Netflix series, Nixon plays the love interest of Nurse Ratched, the titular character played by lesbian actress Sarah Paulson.

“It is not very often that you get even one queer woman playing a queer character,” Nixon told Meyers. “But to have two queer women playing two queer characters who are romantically involved with each other — just almost never happens.”

With the GOP imploding, is a third party the answer? Don’t count on it.