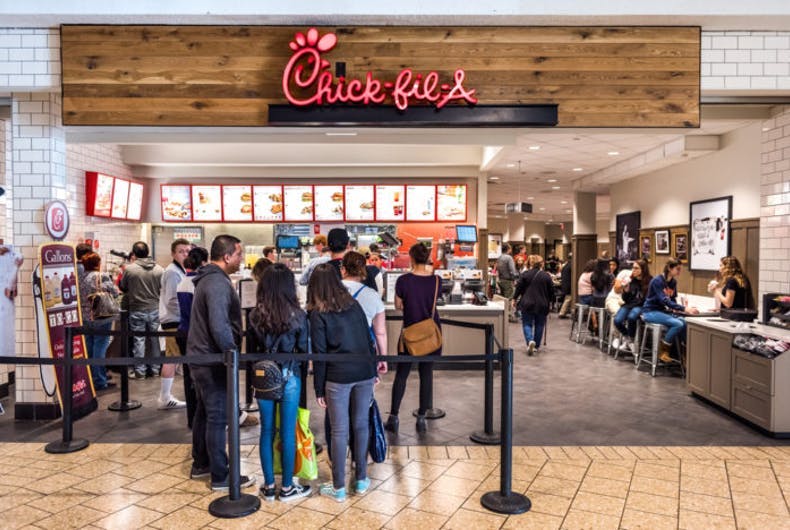 After a long dispute, the notoriously anti-LGBTQ restaurant chain Chick-fil-A announced on Monday that it would no longer seek to open a location at the San Antonio airport.

The battle over the restaurant’s right to lease space at the airport has been waging since March 2019, when the San Antonio City Council refused to allow the fast food chain to open at the city’s airport due to the company’s history of donating millions of dollars to anti-LGBTQ causes.

Related: The GOP’s effort to force an airport to open a Chick-fil-A is costing this city big bucks

“With this decision, the City Council reaffirmed the work our city has done to become a champion of equality and inclusion,” District 1 City Councilman Roberto Treviño said at the time of the vote. “San Antonio is a city full of compassion, and we do not have room in our public facilities for a business with a legacy of anti-LGBTQ behavior.”

In a state with many conservative leaders, this decision sparked instant controversy.

Support for Chick-fil-A led Republican Governor Greg Abbott to sign what became known as the “Save Chick-fil-A” bill in June 2019.

The bill banned government entities from taking “adverse actions” against businesses due to their “religious beliefs,” though it was criticized heavily as giving businesses permission to discriminate against the LGBTQ community.

Governor Abbott signed the bill while dining on Chick-fil-A.

Today I signed the ⁦@ChickfilA⁩ law in Texas.

And, had a great lunch.

No business should be discriminated against simply because its owners donate to a church, the Salvation Army, or other religious organization.

Governor Abbott signed SB 1978, the so-called “Save Chick-fil-A” bill, into law today. This bill is nothing more than an “anti-LGBTQ dog whistle”.

When the City Council barred the fried chicken restaurant chain from the airport, Texas Attorney General Ken Paxton, who claimed the City Council broke federal law by discriminating against Chick-fil-A based on the owner’s religious beliefs, also set into motion an FAA investigation into the City Council’s decision.

While negotiations led the City Council to agree to allow the restaurant to lease space, the chain seems to have changed its mind.

“We are always evaluating potential new locations in the hopes of serving existing and new customers great food with remarkable service,” Chick-fil-A said in a statement, according to the Associated Press. “While we are not pursuing a location in the San Antonio airport at this time, we are grateful for the opportunity to serve San Antonians in our 32 existing restaurants.”

On Sunday, the City Council released a statement to local news channel KSAT rebuking Attorney General Paxton’s recent claims that they were ordered to allow the restaurant space at the airport.

“The FAA has not ordered the City of San Antonio to have Chick-Fil-A at its airport. The City itself offered to resolve the FAA investigation informally following Chick-Fil-A’s publicly stated change-of-position on its charitable giving policy. The City maintains that at no point did it discriminate against Chick-Fil-A. Any placement of Chick-Fil-A at the San Antonio Airport is ultimately contingent on Chick-Fil-A’s continued interest and approval by the City Council.”

“Attorney General Paxton’s inaccurate statements on this issue are not surprising given that neither he nor the State of Texas have been involved in the conversations between the City and the FAA. Unfortunately, and ironically, AG Paxton’s false declaration of victory significantly jeopardizes the potential for a mutually beneficial and amicable resolution.”

In November, Chick-fil-A announced it is reevaluating its giving policy to stop funding anti-LGBTQ organizations, though it was caught in December continuing to do so.

Chick-fil-A President and COO Tim Tassopoulos said the company was fulfilling previous commitments it had made to the organizations. However, Chick-fil-A has broken promises to stop supporting anti-LGBTQ causes in the past, and many have remained cautious about whether the chain will uphold this new commitment.