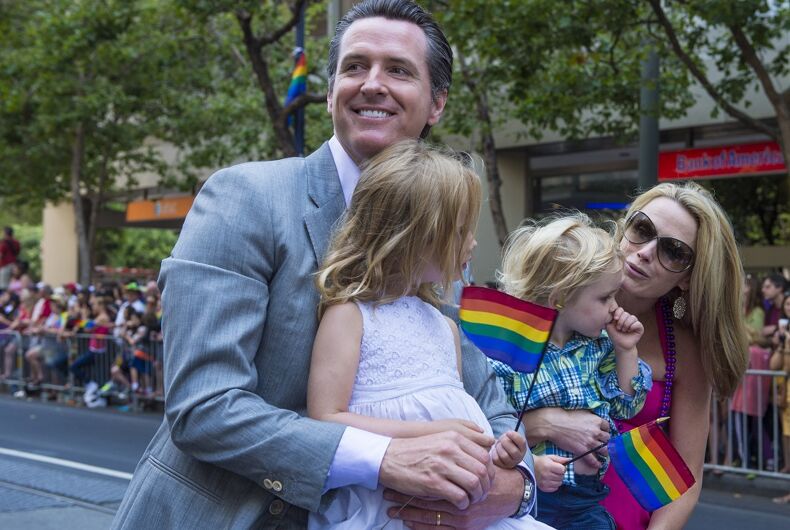 California Gov. Gavin Newsom (D) signed four pro-LGBTQ bills into law this past Friday, including one that expands protections for transgender people in prison.

“California has some of the strongest pro LGBTQ+ laws in the nation and with the bills signed today, our march toward equality takes an additional step forward,” Newsom said in a statement about the bevy of bills.

SB 132 requires the California Department of Corrections and Rehabilitation will now be required to ask inmates about their gender identities and pronouns and house them accordingly. This comes just months after a federal judge ruled that calling a transgender person by their correct pronouns would show bias.

State Sen. Scott Wiener (D), who introduced it, said the bill is “life-saving legislation that will protect trans people in prison, particularly trans women who are subject to high levels of assault and harassment in men’s facilities.”

The governor also signed SB 932, a bill that will require the state to collect information about LGBTQ people and the COVID-19 pandemic.

This bill was also introduced by state Sen. Wiener, who said that it “ensures our community will no longer be invisible, and that we will be counted by our public health system.”

AB 2218, which Newsom also signed, creates a Transgender Wellness and Equity Fund in the state, which will go towards helping transgender, non-binary, and intersex individuals access housing and health care.

“This is a critical measure for our transgender community and I thank Governor Newsom for his steadfast leadership in signing AB 2218,” said Assemblymember Miguel Santiago (D), who introduced the legislation.

The fourth bill was SB 1255, which is intended to fight discrimination in health care faced by people living with HIV.

“I am very grateful for the support of my Senate and Assembly colleagues on this critical legislation,” said Sen. Lena Gonzalez (D), who introduced the bill, when it passed the state legislature earlier this month. “This is a huge step to ensure that Californians living with HIV and their families have equal access to life and disability income insurance coverage.”