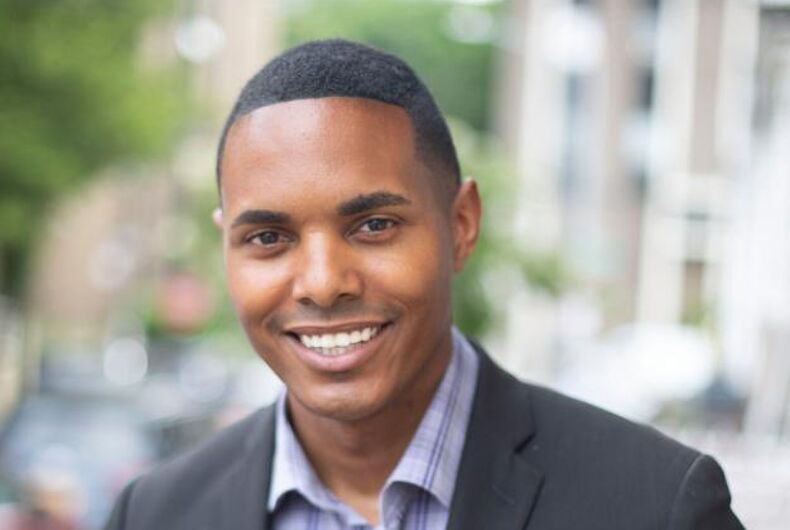 Just like the president, his supporters and fellow Republicans have no problem abandoning anything resembling civil discourse. When it comes to gay Democratic Congressional candidates, that means resorting to vicious slurs against them.

Related: Donald Trump allegedly called a contestant on The Apprentice a “Black f*g”

Progressive Ritchie Torres pretty much has a lock on his race to represent a New York City congressional district. But instead of making nice with a power player, New York Police Sergeant’s Benevolent Association has branded him “a first class whore.”

Torres’ sin, in the eyes of the union, is calling for an investigation into a possible police slowdown as retribution for protests against police brutality.

Under the leadership of Ed Mullins, the SBA has been a poster child for the unaccountability that plagues police departments. The union had its Twitter account suspended last June when it doxxed Mayor Bill deBlasio’s daughter, who had been arrested during Black Live Matters protests. Mullins has been a frequent guest on Fox News, where he rails against the city’s leadership. In a July interview, a mug on display behind him promoted the whackdoodle QAnon conspiracy theory,

Torres, who won his June primary against one of the most vehemently anti-LGBTQ politicians in New York City, was quick to point out the real meaning of the tweet. “It’s homophobic to call an LGBTQ elected official a first class whore,” he said. In a subsequent tweet, Torres called the SBA a “bona fide hate group masquerading as a union. The racism, misogyny, and homophobia of Ed Mullins gives @realDonaldTrump a run for his money.” Torres has called for Mullins to resign.

Although the SBA took the tweet down, Mullins was unrepentant. “Every time something doesn’t go their way, they point to homophobia, racism, sexism,” he told the New York Daily News.

Meanwhile, in Michigan, Democratic congressional nominee Jon Hoadley is battling a smear campaign implying he is a meth head and pedophile.

The origins of the smear are a deliberate misreading of musings Hoadley wrote on his blog as a 22-year old in 2005. In one post, Hoadley wrote about going to a leather bar “to learn about crystal meth,” refering to a meeting to hear about the drug’s dangers. Hoadley’s post even included the direct message “Don’t do meth.”

In another, Hoadley talked about the oversexualization of children, and included a comment from a friend that he had no desire to see “a four-year old in a thong.”

Leave it to the Murdoch-owned New York Post–the print equivalent of Fox News–to rip the quotes out of context and make Hoadley look like a drug-crazed predator in a story titled “Michigan Democratic rising star Rep. Jon Hoadley blogged about drug use and sex.”

Of course, Hoadley didn’t blog about his drug use because there wasn’t any. But you’d never know that from the headline.

The story was clearly planted to harm Hoadley, and his opponent, incumbent Fred Upton, along with the National Republican Congressional Committee (NRCC), have been capitalizing on the smear. The NRCC in particular has no qualms about using language that seems more appropriate to the 1950s, calling Hoadley “a meth-using, pedo sex poet.”

(The pedo is a yet another nod to QAnon, which sees a vast network of child traffickers harvesting kids’ blood for Satanic rites.)

The Victory Fund, which has endorsed Hoadley (now a state representative), has called on the NRCC to apologize, which it will never do.

Unfortunately, the idea of reducing gay candidates to sexual predators and whores is not only the purview of the right. Alex Morse was smeared as a gay predator by a group of college Democrats in his race to unseat incumbent Democrat Rep. Richard Neal. It turns out the group was fishing for ways to set up Morse and at least expressed hope about his job prospects with Neal.

Morse was vindicated–but he lost. Unfortunately, that just underscores the enduring power of the slur.

“I ❤️JK Rowling” billboard vandalized & removed hours after it went up