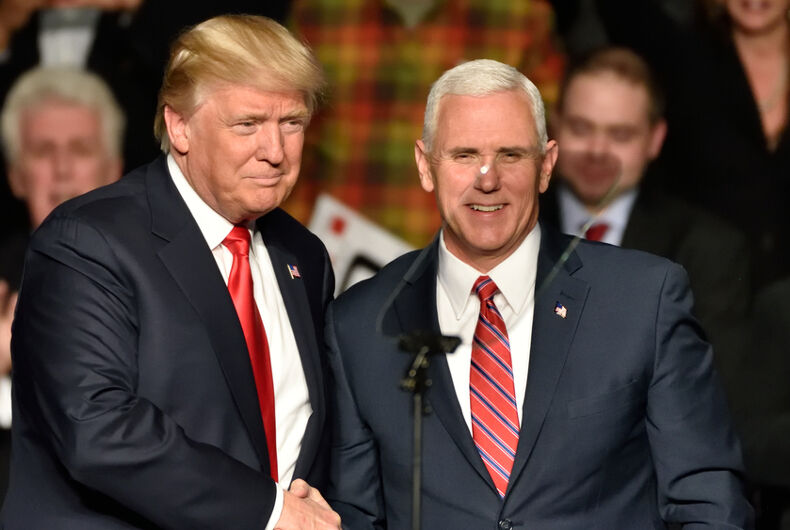 The Trump administration has once again been caught removing references to LGBTQ people from official government documents.

The United States Agency for International Development (USAID) released a draft text for a revised version of their Gender Equality and Women’s Empowerment Policy, removing several references to LGBTQ people that were included in the previous version from 2012.

USAID is the federal agency that manages over $27 billion in foreign aid and development assistance – more than half of the foreign aid the U.S. gives each year with missions in over 100 countries.

The 2012 version of the policy on gender equality discussed LGBTQ people at several points. For example, it previously defined gender-based violence as “violence directed at an individual based on his or her biological sex, gender identity, or perceived adherence to socially defined norms of masculinity or femininity,” and a footnote expanded on this to specifically name anti-LGBTQ violence as a form of gender-based violence that concerns USAID.

The 2012 document also has a list of types of organizations that USAID should be partnering with in its missions and it includes “lesbian, gay, bisexual, and transgender advocates.”

The 2012 policy uses the expression “gender identity” several times and, in a footnote, explains that the policy is concerned with gender identity as “an individual’s internal, personal sense of being male or female” and not just sex “based on a combination of bodily characteristics including: chromosomes, hormones, internal reproductive organs and gen­italia.”

“For transgender people, their birth­-assigned sex and their own internal sense of gender identity do not match,” the 2012 policy explains.

The 2020 policy does not use the phrase “gender identity” at all.

The 2012 policy lists several factors that can further marginalize people, and it includes sexual orientation, gender identity, HIV status, as well as ethnicity, disability, and lack of income. The 2020 policy only mentions “those who face discrimination” without expanding on who, exactly, could face discrimination.

ProPublica reports that the changes led to an exchange of emails between various USAID officials.

Meisburger was appointed to USAID in 2017 by Donald Trump.

“It sends a message when an overarching umbrella policy that is supposed to inform all of USAID’s practices and initiatives is missing those factors,” Gayatri Patel said. Patel is the director of gender advocacy at the organization CARE.

ProPublica also noted that the 2020 policy removed several references to contraception that were included in the 2012 version. The 2020 policy says that “improving healthy timing and spacing of pregnancies” is a health goal and only mentions “fertility awareness” as a way of achieving that goal.

In June, Trump appointed far-right activist and Merritt Corrigan to USAID. Within two months at the agency, she had a meltdown on Twitter, complaining that she was faced with “anti-Christian bias” at USAID “Gay marriage isn’t marriage. Men aren’t women. US-funded Tunisian LGBT soap operas aren’t America First.”

“The United States is losing ground in the battle to garner influence through humanitarian aid because we now refuse to help countries who don’t celebrate sexual deviancy,” she tweeted.

She was fired soon after sending those tweets.

Chasten Buttigieg gets blunt with Fox News during live interview