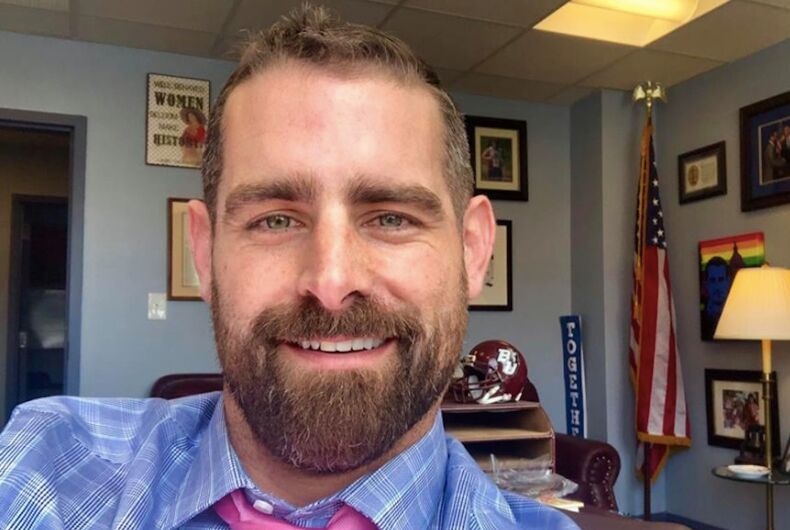 A Republican lawmaker called the police this week on an out Democrat, saying that the gay legislator made him fear for his family’s safety.

Pennsylvania Rep. Tom Murt (R) said that he called the police after a tense phone call with state Rep. Brian Sims (D). Sims denied making threats and claims that the conversation was about Murt allegedly “killing the effort to advance LGBTQ legislation.”

Murt said that Sims “never actually articulated why he was so angry” on the call but that he assumed it was about the LGBTQ bill.

He accused Sims of making “a verbal, hostile and threatening attack on me personally, using foul language” on the phone call. He said Sims told him, “I will ruin you,” “You are finished,” “I will get you for this,” and “I’m not done with you.”

“The rhetoric was so aggressive and belligerent, it was hostile, and of a threatening nature,” Murt said. “In order to protect my family and my staff, I wanted to talk to a police officer.”

Upper Moreland police confirm that they are investigating the incident but have not provided further details.

“LOL in my entire life I’ve never said these things to Tom [Murt] or anyone else,” Sims wrote.

“I did make it abundantly clear to him that killing the effort to advance LGBTQ legislation in Pennsylvania with his weird campaign effort is something that I’d make sure advocates knew about. And they do.”

At issue is a memo Murt co-sponsored on Monday in favor of an “LGBTQ Bill of Rights.” The memo supports protections for LGBTQ people in the state, which lacks inclusive civil rights and hate crimes legislation (a state commission banned discrimination banned anti-LGBTQ prejudice in 2018, citing the state’s ban on discrimination because of sex).

The memo did not specify what the legislation will look like and is meant to drum up support for a bill, which has not yet been written. There are only two weeks left in the Pennsylvania legislature’s session.

Murt said that Sims sent him a text message saying that the memo was “treating LGBTQ+ rights as a ‘joke or a football'” on Monday.

“When people pretend to care about equality legislation that they’ve had all term to advance, just in time for the elections, and not in enough time to actually advance equality,” Sims told the Pennsylvania Capital-Star, they aren’t actually interested in passing the bill.

And on Thursday, Sims wrote a column for The Advocate calling out “performative allyship.” The column did not mention Murt by name.

“Every two years our legislature essentially starts over, as it will in January,” Sims wrote. “All new bills, all new efforts, sometimes even new leadership. But the ‘support’ we saw at the end of the term, just before the election, is gone. It always is.”

“What is left though is worse than what we started with. The residue of failure after the fake ‘bipartisan’ effort leaves a stain on the authentic effort.”

Effectively, he was saying that two weeks isn’t enough time to pass sweeping LGBTQ legislation in the state and that proposing such a bill now will make things harder next year, especially when it could have been proposed a year ago when it had a better chance of passing.

He said that some Republicans in his state have used this maneuver on some issues – like equal pay for women in 2016 or education funding – to “appear moderate” without actually passing legislation that more conservative Republicans would oppose.

Murt, who is retiring in January, denied that Sims was referring to any legislation in the phone call.

He told the Courier Times that two weeks is enough time to write a bill that may include “adoption rights, conversion therapy bans, hate crime language, and overall protections in public accommodations for LGBTQ individuals” and post it online.