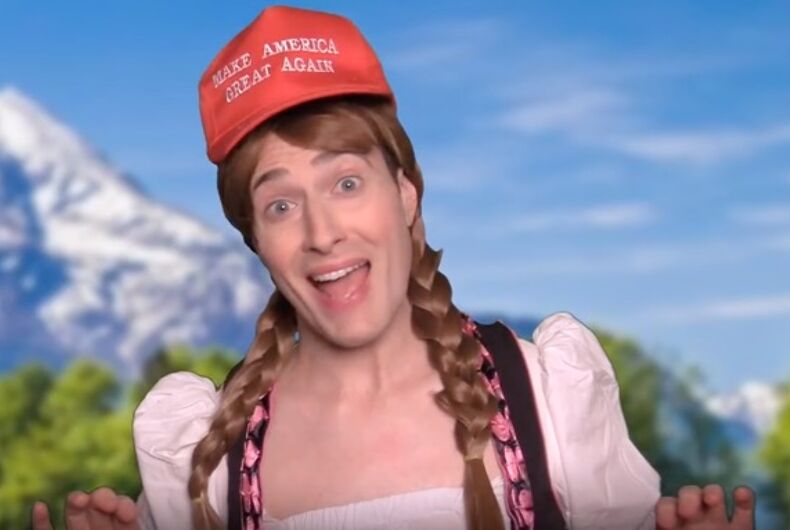 Political satirist Randy Rainbow apologized for the dozens of racist, antisemitic, misogynist, and transphobic tweets he wrote years ago that resurfaced earlier this week.

“They make me sick to my stomach, in fact, and I deeply apologize to anyone I offended,” he said in an interview with The Advocate.

Twitter users passed around a spreadsheet that listed tweets Rainbow wrote from 2010 on that called Black and Hispanic people violent criminals, gratuitously used slurs like “tra**y,” made light of rape, and otherwise played on stereotypes of various minorities.

“Why is it OK to call it a ‘white noise’ machine, yet offensive to say that I bought it to drown out all the ‘black noise’ in my building?” Rainbow said in one tweet.

“Fun new project in the works! I’d tell you but then I’d have to rape you,” he wrote in another

The offensive tweets continued to at least as late as 2014, when he was making jokes about Black people and fried chicken.

“Twitter has recently reminded me about 10 years ago, in my maiden quest to be funny, I tweeted some jokes that were completely offensive and insensitive to look back on them now, especially with no context or nuance and through the prism of where we are in 2020 with racial inequality and the fight for social justice, which I’m proudly a part of,” he said this week.

“In light of issues that are now at the forefront, which I’m passionate about and have spoken up about over the years, these tweets just sound racist and awful. I’m embarrassed by them. They make me sick to my stomach, in fact, and I deeply apologize to anyone I offended.”

He said that humor was “completely different” a decade ago. He said that the world has “shifted dramatically” since he wrote those tweets.

“This kind of edgy shock comedy was not only acceptable but a prevalent style,” he said. He mentioned influences like Joan Rivers and Karen from the sitcom Will & Grace.

“I was an aspiring comedian in my 20s working the stages in gay nightclubs where we said the most outlandish, raunchy things we could think of. I was searching for my comedy voice, my persona, and I was emulating styles and jokes of people that I was seeing in the mainstream. Any jokes that I tweeted out around this time were meant to be read in the voice of this character I created.”

“I am incredibly sorry. I would never intentionally do anything to hurt anyone,” he said. “I am in no way a racist. I am in no way transphobic. I’m a gay Jew who was brought up in a very open, accepting family. There is not a racist or intolerant bone in my body.”

This past Monday, Rainbow made a video in support of vice presidential candidate Kamala Harris, which he appeared to suggest is why he’s getting called out on the old tweets now.

“I’m being threatened. I’m being harassed,” he said. “It’s no coincidence that it’s happening in the midst of a very contentious election because I use my platform every day to speak truth to power and shine a light on inequities and injustices of the world, and expose truly intolerant and racist people. There are nefarious people out there who want to silence me because they don’t like what I really have to say.”

His video from this week is below.

Chasten Buttigieg gets blunt with Fox News during live interview