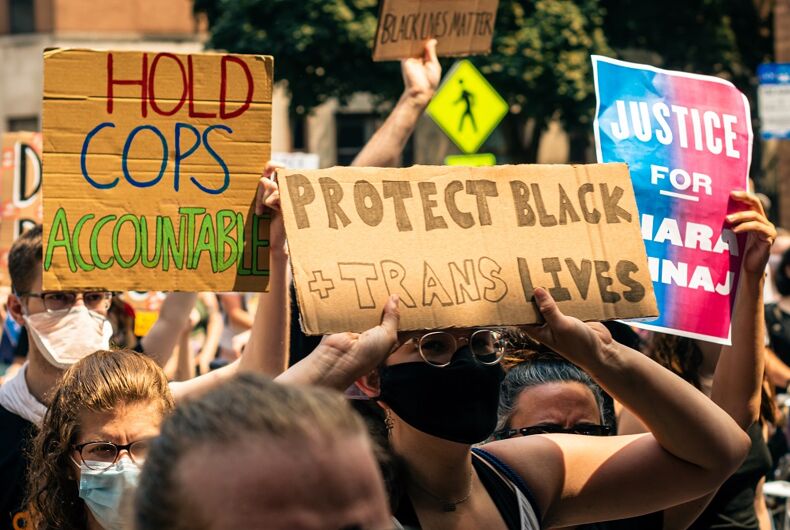 “My genitals were just a topic of conversation throughout most of the night,” said Gabriela Amaya Cruz, one of the trans women who was arrested, told the Miami Herald.

Cruz and Jae Bucci were two of the thirty people arrested in Miami at a July 23 protest for allegedly obstructing traffic and they were taken to the Turner Guilford Knight Correctional Center.

Cruz said that she had to repeatedly tell officers that she is a woman, even as they sent male officers to frisk search her body. Miami-Dade Corrections and Rehabilitation Department policy is that an officer of the same gender – based on self-identification – must search an inmate’s body if the inmate requests it.

Officers “pointed at my genitals and said you have a penis, therefore you are going to be treated as a man,” she said officers told her.

She was then told to sit in a holding area with men, and she refused. The officers made her sign a document saying that she’s a woman and she was taken to a women’s holding area. Her ID still has the gender marker associated with her sex assigned at birth.

Bucci – who had already corrected the gender marker on her ID – said that a female officer took off her facemask to take a mugshot and then started to stare at her face. She had to remove her clothes and she asked the officer if she could keep her underwear on because it’s made for tucking.

“I knew it, I could tell by your voice. That’s what I was looking for,” she said the officer said.

A different officer then told her that her intake paperwork would be changed to say that she is a man. She showed them her ID, but they wouldn’t listen.

“They have no standard for trans people,” Bucci said, adding that she was “disgusted” by the process.

“To get your sex marker changed, to be considered to have had a sex change, you either have to get surgery done or you have to be on hormone therapy for a few years. So who taught them, who trained them?”

She was later told that she would have to go to the men’s holding area because “You are trans, you have a dick, you’re still a man.”

“You have not cut it off, so you are still a man, until you remove that you are a man,” a guard allegedly told her. The guard said that her genitalia made her a threat to the other people in the women’s holding area.

Officers eventually put her in solitary confinement. But when she was taken out of solitary at 9 a.m., officers outed her as trans to other inmates. Some of the men laughed at her and made obscene gestures like grabbing their crotches.

Both Cruz and Bucci said that they were given their clothes back as they were leaving but told that they had to wear unisex clothes provided by the jail.

“We have policies, you are a man leaving prison so you cannot wear women’s clothing, you are a man, we don’t allow cross-dressing,” Bucci said an officer told her.

A Miami-Dade Corrections and Rehabilitation Department spokesperson wouldn’t comment on their specific cases but said that transgender people are housed “based on housing availability, safety/security needs, and his/her gender identity and genitalia.”

Cruz said that she felt “completely dehumanized” by the experience.

“I think there has to be more education on LGTBQ+ folks that enter the jail,” she said. She posted about her experiences on Instagram.

24 hours ago myself and 42 other protesters got arrested for marching peacefully in memory of all the black trans lives that were murdered this year. We were aggressively outnumbered by police who used excessive force on many of us and blocked us from leaving. Protesting is human right. My experience as a trans/ disabled women was anything but pleasant. The way they dehumanized my experience as a woman was horrifying. I was constantly asked about my genitals by different officers. and because I still have a “dick” and my name/ gender marker are still male I will be treated as I man. They also forced me to take my wig off. however, I did not allow them to try and erase my femininity. I stepped back and told them that I am a TRANS WOMAN AND I WILL BE TREATED AS A WOMAN. Then both male officers tell me that I’m being difficult. As a woman officer walked by, she said “come here, baby” and made sure that I was patted down by her + signed a waver stating I was trans & that I wanted to be held with the other femmes. When it was time to get finger printed the officers were using excessive force on my hands and were getting frustrated because none of my fingers could be straighten due to my disability. My dead name was being screamed out constantly. I felt like the whole time I was there I was fully erased. I put on a tough face and a thick skin until I was bailed out at 4:30AM. I was locked up for about 10 hours. Although the cops fully disregarded my womanhood, it was very affirming to be around other protesters who made my time there a little easier by calling me by my name and my pronouns. On top of that all of my close friends and other activist were there when I was released. I was greeted with a big hug by my best friends and started crying. I’m just grateful to have community that is always looking after the people who are simply fighting for black/ black trans folks to be treated EQUALLY. I want to thank all the organizers/ people who donated to bail all of us out. The system is so corrupted and we can not stop fighting. When we said no justice, no peace. We really meant it.

Police in Miami started cracking down on protestors last month, especially in cases where they were blocking traffic. But people at the July 23 protest – which officers wrote in multiple reports that they were “protesting in the middle of the street and blocking the regular flow of vehicular traffic” – told the Miami New-Times that they mostly weren’t in the street because they didn’t have enough people for that kind of protest.

Video from the protest shows marchers on the sidewalk as they were arrested in a chaotic scene.

Editor’s note: An earlier version of this story incorrectly said that Bucci convinced officers to put her in solitary, and she has informed LGBTQ Nation that that was not the case. We regret the error.