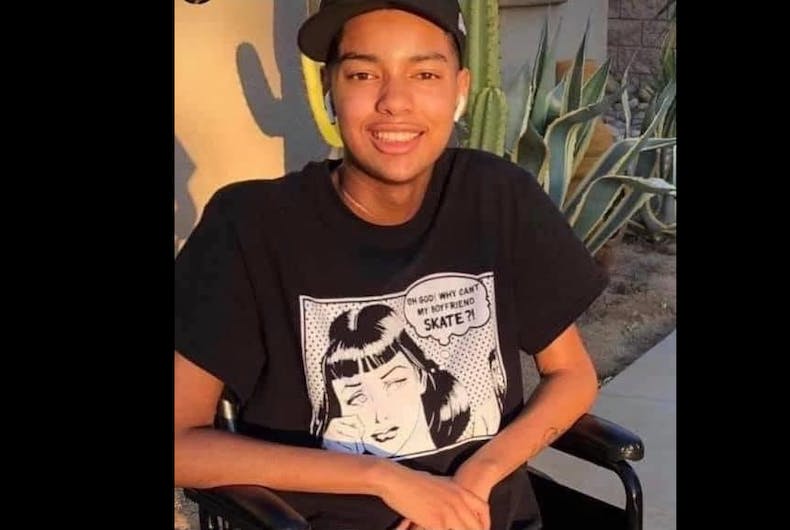 UPDATE: Kristian has regained his voice following surgery to his vocal cords to remove scarring caused by being on a ventilator.

When Kristian Rouse’s mother hadn’t heard from him for two days, she knew something was wrong. The two communicate daily and her intuition told her that he needed her.

Since he had recently moved, Eurydice Darrington contacted his ex-girlfriend and the two went to find him. What they found was straight out of every mother’s worst nightmare.

Related: This transgender immigrant’s message of love is what we need right now

The two peeked through the windows after getting no response and saw Rouse lying on the floor unconscious. Frantic, they called the police, but officers couldn’t enter the apartment since there was no obvious emergency and it wasn’t his apartment. They didn’t have permission to enter.

“I begged and pleaded and was crying and was hyperventilating,” she said.

After the police left, a hysterical Darrington convinced staff at the apartment complex to let her into the apartment. Rouse’s injuries were visible once they were inside the unit.

Rouse had marks around his neck, bruises on his knuckles, collapsed lungs, and air trapped in his stomach. His shirt was ripped open and his chest was exposed, something she pointed out that would be a “humiliating thing for a transgender male.”

Rouse doesn’t remember being attacked, but he’s lucky to be alive. He was on a ventilator for a month and his right arm and leg were paralyzed. He is unable to speak or walk.

“Kristian and I are both taking things one day at a time and to be honest, it has been tough; we are both traumatized,” Darrington told LGBTQ Nation.

“[Doctors] say that it will probably take two years to get complete use of his right arm and leg. There is a little more worry about his right foot, (he has no feeling in it whatsoever); we will just have to see how it goes.”

“Kristian’s mood is all over the place and he gets pretty depressed,” she added. “This happened at the end of his senior year and he missed his graduation because he was in the hospital.”

“I reached out to her because I’m one of the leaders for Free Mom Hugs in California,” Kelly McKinsey told LGBTQ Nation. “When I heard his story happened in my home town I felt like I had a network I could reach out to, to do something for them.”

The group of moms regularly attends LGBTQ pride parades and other events to offer love to people who have been rejected by their families. Rouse hadn’t been rejected, but he definitely needed some extra love.

“The LGBTQ community has been amazing!” Darrington said as she rattled off a list of kind gestures, from financial support to free therapy, from several community members and organizations.

But McKinsey’s idea is a simple and direct way for people worldwide to lift Rouse’s spirits – with a personal touch. She’s asking the queer community – and supporters – to send him greeting cards and notes of encouragement. She will pass on anything sent directly to him – along with a hug, of course.

If you’d like to send a get-well note full of love, please address it to: