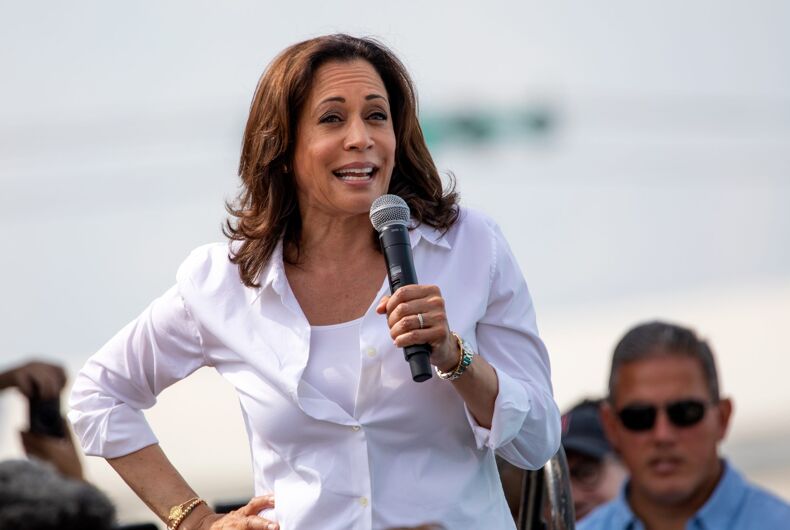 Oy vey iz mir! It’s déjà vu all over again in the so-called birther conspiracy continuing saga. This time, though, the plotters and their collaborators are amassing they venom against Sen. and Democratic vice presidential candidate Kamala Harris’s birth status.

Donald Trump, arguably the more prominent of the so-called birthers, attempted to delegitimize Barack Obama’s presidency by continually arguing that he was born outside the United States, even for years after Obama released his official birth certificate in 2008.

Related: In 1972, gay people spoke at the Democratic National Convention for the first time

This along with Trump’s supposed investigations into Obama’s time spent in Indonesia as a child, and inquiries into his African roots on his father’s side coexist as not-so-veiled xenophobic and racist rants.

He consistently tried to define Obama as the other by attempting to prevent our former president the right of self-definition – an apparent contradiction within a Republican political party that supposedly emphasizes rugged individualism.

Trump’s beloved conservative radio talk show host Rush Limbaugh was one of the chief architects of the “birther” movement, challenging Barack Obama’s citizenship status and referring to his mixed racial heritage as “halfrican-American” and as “Barack the Magic Negro.”

Harris was born in Oakland, California on October 20, 1964. Her parents were both immigrants with her father from Jamaica and her mother from India. They became naturalized U.S. citizens after Harris’s birth.

Because she was born in California with documented certification to prove it, Harris is a bone fide natural-born citizen of the United States, period, end of discussion!

This is not dependent on parents’ citizenship. “Anyone born on U.S. soil and subject to its jurisdiction is a natural born citizen, regardless of parental citizenship,” according to the Cornell Legal Information Institute.

The only Constitutional requirements for presidential candidates are that the candidate “must be a natural born citizen of the United States, a resident for 14 years, and 35 years of age or older,” according to the Library of Congress.

At a press conference, a reporter asked Trump about a Newsweek column written by far-right lawyer John Eastman, which asserted that Harris is not eligible to serve as vice president since her parents were immigrants. Eastman claimed that Harris “owed her allegiance to a foreign power or powers” because her parents came to the U.S. from India and Jamaica.

“I just heard that. I heard it today, that she doesn’t meet the requirements,” Trump said.

“And by the way, the lawyer that wrote that piece is a very highly qualified, very talented lawyer.”

“I have no idea if that’s right,” Trump continued. “I would have assumed the Democrats would have checked that out before she gets chosen to run for vice president.”

Trump by not refuting the conspiracy essentially gave it credibility from his “bully pulpit.”

“But that’s a very serious – you’re saying that, they’re saying that she doesn’t qualify because she wasn’t born in this country?” he said. “…I’ll take a look.”

While two Black candidates for the highest offices in the land faced intense challenges to their eligibility to run for president and vice president, others have experienced far less pushback than Obama and now Kamala Harris.

In modern U.S. history, Sen. Barry Goldwater, the Republican presidential candidate in 1964, was born on January 2, 1909 in Phoenix in what was known as the Arizona Territory three years before it entered the union as a state.

There was little question whether Goldwater was eligible to serve as president. Born in an organized incorporated territory established in 1863, the act and through the courts interpreted granting U.S. natural born status to people born there.

Similarly, Sen. John McCain (R-AZ) was also born in a U.S. territory – the Panama Canal Zone – and likewise was eligible to run for the presidency as the Republican candidate in 2008.

Former Michigan Gov. George Romney, former Governor of Michigan and father of 2012 presidential candidate Mitt Romney, ran for president himself in 1968 though he was born in Mexico.

The elder Romney’s parents, devout Mormons, were born in the U.S. and moved to Mexico to practice their religion without some of the constraints they experienced in their homeland. Because his parents were both natural born U.S. citizens, though he was born outside the country and its territories, George Romney was officially classified as a natural born U.S. citizen.

The same is the case for Rep. Tulsi Gabbard (D-HI). She was born in American Samoa, which is unlike other U.S. territories in that people born there do not receive automatic U.S. citizenship. Gabbard was able to run for the 2020 Democratic presidential nomination because her mother was born in Indiana and therefore she was a U.S. citizen since birth.

Like Gabbard, Sen. Ted Cruz (R-TX) – who ran for president in 2016 – was born in Canada to a U.S.-born mother and Cuban father. Because of his citizenship at birth which he obtained through his mother, Cruz fulfilled all the requirements to run for and serve as the chief executive.

In deference to the Constitutional requirements to serve as president of the United States, the first nine presidents were not born in the country, but rather, most were born in a British territory or colony. Circumventing this requirement for the Founders and others, however, they were eligible since they were citizens during the time when the Constitution was adopted.

Maybe if the current president and his conspiratorial cronies read and understood the law, they might abandon their birther mishegoss. And maybe is they relied on real science rather than wishful thinking, our country might better handle the deadly coronavirus.

But, no. Neither of these will happen! So on to November.