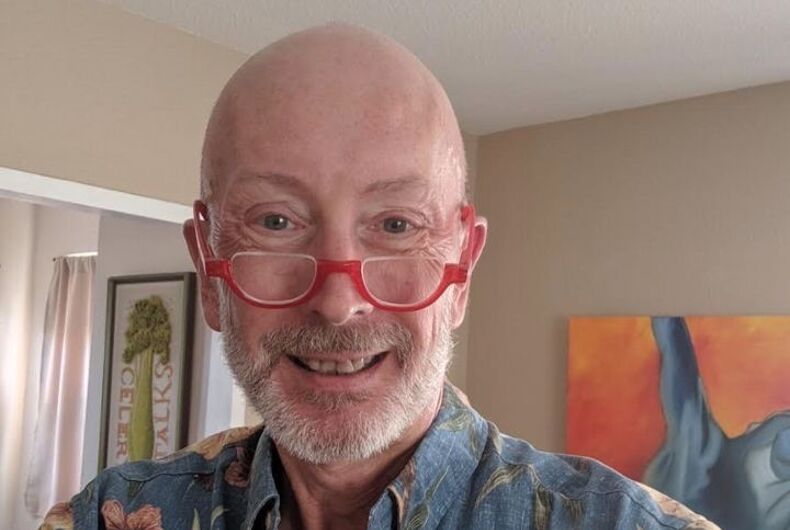 Jake McPherson thought he was out to his parents. After all, he came out to his wife and children, told his mom (who met his male partner) almost two decades ago, and he thought she had told his father.

In a heartbreaking essay for HuffPost, McPherson recounts a phone call he got his dad earlier this year. His 90-year-old father had finally set up a Facebook account and discovered that his son is out and proud. His father had called to disown him.

Related: This Christian university student’s coming out is one for the history books

“It’s about this homosexuality. Your mother and I can’t condone that. You are not to contact us in any way ever again,” he says his father told him when he picked up the phone. Am I making myself perfectly clear?”

When McPherson said he was, his father hung up the phone.

Both of his parents are fundamentalist Christians and he recounts in the essay how their brand of religion forced him into the closet and helped ease him into alcoholism in a desperate attempt to mask his feelings. Eventually, at age 35, he took his first steps to get sober and come out.

He says his mother was “horrified” when he told her in 2001 that he is gay. She met a man he lived with and despite being “polite but distant” during the visit, he never imagined she hadn’t told his father.

For almost 20 years, he thought his father was just keeping the peace by not bringing up the subject and McPherson did the same.

“At one point my 24-year-old daughter called me in tears and asked if I would ever disown her. She honestly wondered if she could do something that would cause me to stop loving her,” he wrote. “I began to cry too as I made sure that she knew my love for her is and always will be unconditional. I do not know if I can ever forgive my parents for the trauma they have inflicted on my children.”

Still, McPherson ends on a somewhat positive note. His mother now suffers from dementia, but for his birthday she sent him a card. Inside, it simply said, “We love you.”

“There was no preaching. No venom. And, even more incredibly, it was the first time in my life that she used the word ‘love’ without being prompted,” he wrote. “Because of her dementia, her critical self has disappeared and, at the age of 89, it appears she’s turned into the loving mother I never had.”

“I’m going to keep this beautiful card as a reminder that somewhere inside of her, she holds love for me and that, maybe, it’s never too late to find and receive and send out love into the world ― exactly as you truly are.

“Despite everything we’ve been through, that feels like a gift. I think I’ll accept it.”

Angèle is the most famous pop star you don’t know. She just came out.