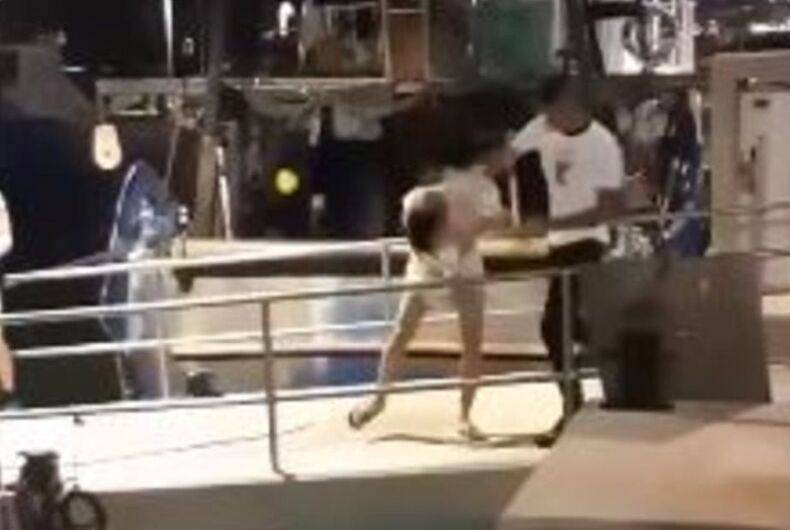 A vicious hate crime at the Joffa Port in Israel has shaken the country.Photo: Screenshot

A violent mob attack on two young gay men has shaken Israel as shocking video circulates of a lone man coming to their rescue while hundreds watched and did nothing to help.

The couple was attacked at the Joffa Port by a group of about 20 men. Itzik Avneri, the owner of the boat next to where the attack took place, helped fend off the men, going so far as to throw one man in the water.

“I have a tour boat in the port, and there was the holiday [of Eid al-Adha] for the past few days when a lot of Muslims come to the port to have a good time and take a cruise,” Avneri told Haaretz. “Two guys got on the boat to go sailing and when it ended, they got off and sat on the dock next to each other. Other people saw them and spat at them.”

Avneri said he asked the group why they had spat on the men, and was told, “Because we’re Arabs and they’re gays, and there won’t be gays among the Arabs, it gives Arabs a bad name.”

The couple went to eat, ignoring the group to avoid conflict. But when they came out of the restaurant, the men attacked as onlookers recorded the incident on video and stepped away from the melee. One of the men was able to pull out pepper spray, immediately knocking over a dozen of the men out of the fight.

“Then the owner came and started pushing them away, until only the two seen in the video were left,” the victim told the outlet.

“I pulled the victims out and put them into the private area of the port where the ships dock, because there is a fence there so I could protect them,” Avneri said. “Two of the gang jumped over the fence and they began to hit and kick them.”

“So I threw him into the water. This violence was  just because of the hate. There was no talk between them, all they did was look a little bit different, that’s all.”

Avneri castigated the bystanders who refused to intervene, saying, “What you don’t see in the video is 500 people, not a single one of them lifted a finger” to help.

“They wanted to kill me. I thought I would die,” the victim said. “The port was full of people. No one helped.”

Government officials and politicians have condemned the attack. One teenager has been arrested so far.

“The homophobic attack in the Jaffa Port is a horrific event that must not overlooked,” lawmaker Ofer Cassif from a coalition of predominantly Arab parties said. “I expect the attackers to be treated as perpetrators of a hate crime in every way… Homophobic hatred is as ugly and dangerous as any other form of discrimination.”