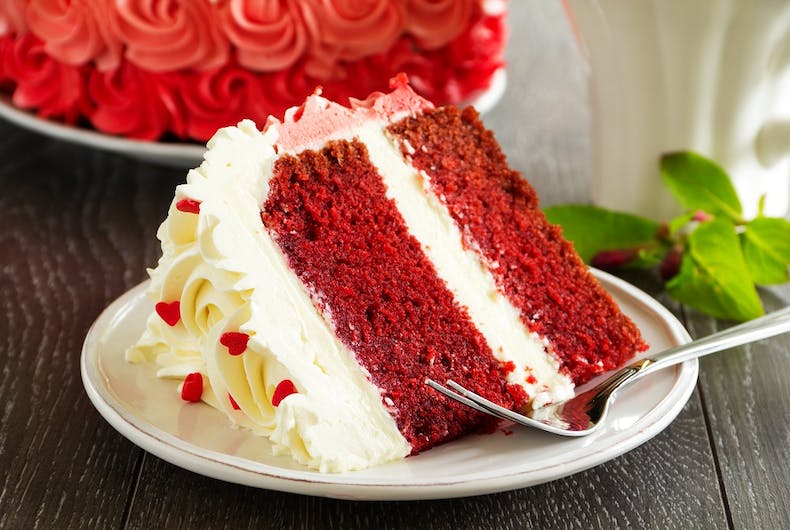 And he didn't even pick up his red velvet cake!Photo: Shutterstock

A rightwing troll ordered a cake with an anti-LGBTQ message from a lesbian baker, apparently hoping that she’d refuse to make it so he could cry anti-Christian bigotry.

She made it, though. He refused to pick it up for days. She eventually had to throw it away, and then the troll threatened to take her to court.

April Anderson runs the Good Cakes and Bakes bakery in Detroit with her wife Michelle. She has made a name for herself and has baked for Oprah Winfrey and appeared on the Today show.

But she’s not a stranger to bias.

“We are so used to being Black lesbian women,” Anderson told the Detroit Free Press. “You are used to people discriminating against you and saying mean things to you.”

On July 19, Good Cakes and Bakes got an order for a red velvet cake. The customer had already paid for it online and requested a message for the cake: “Homosexual acts are gravely evil. (Catholic Catechism 2357)”

“I am ordering this cake to celebrate and have PRIDE in true Christian marriage,” the customer wrote in with the order.

“Why would somebody order this from us?” Anderson said. “They know our bakery. It’s not like it’s a secret. It says it on our about page and social media pages and very clear that this bakery is owned by two lesbian women.”

Anderson and a friend did some digging and found out it was David Gordon, a white man whose Twitter bio says he’s “Copyeditor @ Church Militant. Lawyer, theology MA, author, sportsman, family man.” Church Militant is a far-right Christian website that opposes LGBTQ equality.

Gordon had already paid for the cake, so Anderson made it. She didn’t write message on top because, she said, the bakery’s policy is that written messages cannot be submitted with online orders. Anyone who wants a written message has to call.

Gordon was scheduled to pick up the cake on July 25. On July 24, he called the bakery and Anderson said the cake would be ready for the next day. She wrote a letter to go with it “just explaining what our bakery stands for, who we are,” she told Pride Source.

“We don’t stand for hate, we’re all about peace and justice and inclusion.”

The next day, Gordon didn’t even pick up the cake.

“I think he was trolling us and he wanted me not to make the cake so that he would have an argument about us being discriminatory against him for not making a cake,” Anderson said. “I think it shocked him when he called Friday and we said, ‘Oh, yeah, we’re making the cake.’”

She kept the cake around for a few more days but ended up throwing it out. On July 30 – five days after he was supposed to pick up the cake – Gordon called again asking about it. She told him he could order another, but if he wants a written message he has to call instead of using the website.

That was it until Pride Source published a story about the incident on August 6, including the part where she didn’t write the message on the cake. Which apparently made him want the cake again.

On August 7, he tweeted: “Good Cakes and Bakes is discriminating against me for requesting a cake virtually quoting the Catechism of the Catholic Church sec. 2357. No more anti-Catholic discrimination. See you in court.”

“I was denied the services I requested at a place of public accommodation on the basis of the content of my beliefs,” he later told the Detroit Free-Press in an August 13 article.

“Imagine the umbrage if a homosexual couple arrived at their ‘wedding’ reception to find a Christian baker had made them a ‘straight’ cake.”

He did not explain what a straight cake is.

The best-known case involved Jack Phillips of Masterpiece Cakeshop, who refused to even discuss what kind of cake Charlie Craig and David Mullins wanted for their wedding in 2012, saying that his Christianity prevented him from selling a cake that would be used at a same-sex wedding.

The Colorado Civil Rights Commission found that he discriminated against the couple, in part because they didn’t even discuss any details of the design of the cake. Phillips’s free speech rights, the commission reasoned, only come into play if he had an objection to the product being ordered, not just the people who were buying the product.

This was different from another Colorado man in 2014 who tried to get a bakery to make him a cake with the message, “Homosexuality is a detestable.” He complained he was facing anti-Christian discrimination, but both the Commission and Colorado courts agreed that a written message is different from just selling a product.

Conservatives have been using cases like this one to push for religious exceptions, arguing that selling a product to LGBTQ people can be seen as an endorsement of homosexuality and therefore a form of speech.

“An argument can be made that the message they wanted on the cake might have gone into the realm of compelled speech,” Kaplan said.

Anderson said that incident isn’t going to keep her from taking pride in her work.

“We’re not gonna change who we are,” Anderson said. “We made it very clear when we opened. Some people are like, ‘Oh, we’re just not gonna tell people, we want to keep stuff separate.’ You can’t compartmentalize your life. We’re very, very proud, open.”