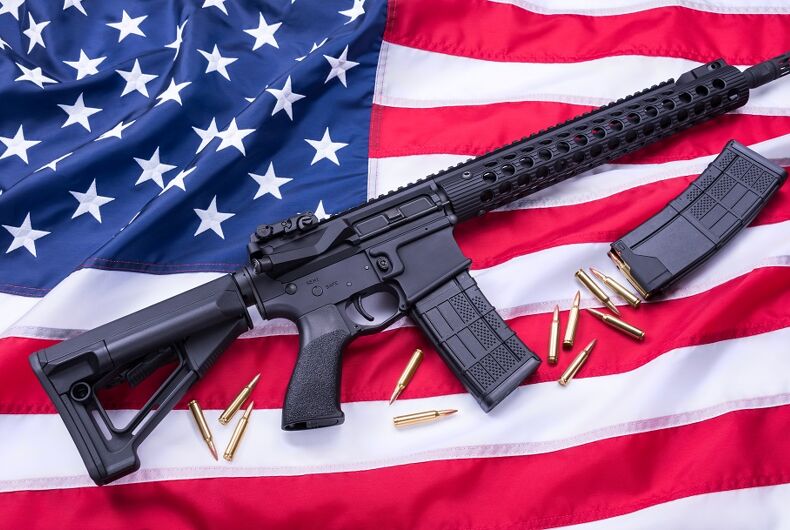 The Christian crowdfunding website GiveSendGo.com has raised hundreds of thousands of dollars for a 17-year-old white teen who allegedly murdered two people in Kenosha, Wisconsin last week during a protest for an unarmed Black man who was shot by police.

“Kyle Rittenhouse just defended himself from a brutal attack by multiple members of the far-leftist group ANTIFA,” the Christian website claims under the Blue Lives Matter flag. “The experience was undoubtedly a brutal one, as he was forced to take two lives to defend his own.”

Related: Third man steps forward to accuse Falwell of sexual misconduct. He was a student at the time.

Rittenhouse is believed to have traveled from his home in Antioch, Illinois to Kenosha with a semi-automatic rifle. An “aspiring cop,” the shooter went to Wisconsin to counter-protest Black Lives Matter demonstrations that followed the police shooting of Jacob Blake, a father of six who was left paralyzed when Kenosha Police shot him seven times.

At the counter-protest, Rittenhouse fired upon a crowd of people, killing two and injuring another. He walked passed a group of police officers and wasn’t arrested until he got back to Antioch.

“Now, Kyle is being unfairly charged with murder 1, by a DA who seems determined only to capitalize on the political angle of the situation… Kyle and his family will undoubtedly need money to pay for the legal fees,” the Christian fundraising website campaign’s authors claim. They are calling themselves “Friends of the Rittenhouse Family.”

“Let’s give back to someone who bravely tried to defend his community,” even though Rittenhouse wasn’t a resident in the state of his alleged crimes.

It appears it only took them four days to reach their goal of $200,000, and they are still receiving donations, currently at $270,000 from more than 6,000 contributors at the time of publication.

Despite calling themselves friends of the Rittenhouse family, only one author, “Rob,” is actually named. An update to the campaign reveals that Rob had only “just spoken” to Kyle’s mother through their attorney, L. Lin Wood.

After “connecting” with Wood, Rob was instructed by the lawyer – who announced his intent to “volunteer” on Rittenhouse’s behalf – to transfer the money over to his #FightBack Foundation. The lawyer’s foundation supposedly takes on “the radical left media” that is helping “the deep state” that has “spied and harassed President Trump” since 2016.

The Kyle Rittenhouse Defense Fund is the second-leading active campaign on the Christian website. On Twitter, the site claims they are the “only platform that has allowed a campaign for Kyle Rittenhouse.”

This campaign is far from the only crowdfunding campaign that claims to raise funds on Rittenhouse’s behalf – even Fight Back’s own website is accepting donations up to $10,000 on its website. Arizona State University’s College Republicans United (which no longer affiliated with the national College Republicans organization) announced that half their donations for the semester will be used for Rittenhouse’s defense.

The same group, confronted on campus last year for homophobic and anti-Semitic activity, told AZ Central that they “do not speak to journalists with pronouns on their Twitter page,” adding that journalists should “get a real job.” The National Association for Gun Rights also announced right after Rittenhouse’s arrest that they would raise money for the gun-loving teen.

Rittenhouse faces charges as an adult for two counts of first-degree homicide, one count of attempted homicide, reckless endangerment of two people, and possession of a weapon while under the age of 18. Following these events, Donald Trump announced his intention to visit Kenosha, despite Wisconsin Gov. Tony Ever’s pleas for him not to.

Founded in 2013, GiveSendGo touts it 0% fee for using the platform, only charging transaction fees for fundraisers.