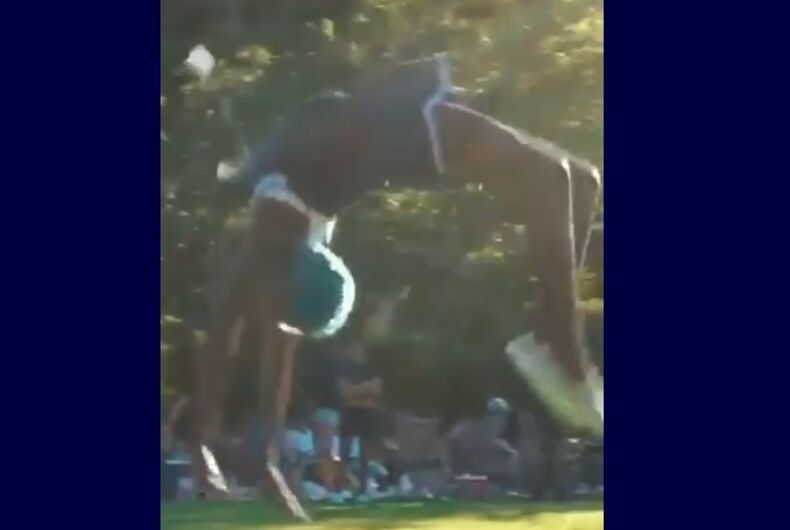 Zaya Wade, the transgender girl whose dad is NBA player Dwyane Wade and stepmom is actor Gabrielle Union, is astonishing her Instagram followers with her athletic skills.

In a video posted to the social media platform yesterday, Zaya’s brother Zaire is doing cartwheels in a park.

Zaya starts doing cartwheels and backflips as everyone cheers for her. She ends in the splits and made it all look easy.

So easy that her brother tries to do the same, but he can’t pull off the backflips.

Zaya posted the video with the caption, “Sunday Fun,” showing that this isn’t even a big deal for her.

Dwyane Wade has been a very supportive father to his transgender daughter. Last year, Wade attended Pride with Zaya and the rest of the family and defended her when he got negative comments on social media.

Later in the year, he posted a Thanksgiving family picture to Instagram and followers noticed that Zaya was wearing stereotypically feminine clothing. Wade again stepped up to defend her and LGBTQ youth: “As a parent my only goal is that my kids feel that I see them, love them, and support them,” he tweeted.

In December, he discussed how he was supporting Zaya at greater length in an interview and he referred to her with “she” pronouns a few times.

This year, he told the world that she’s transgender on Ellen’s show and he has been an advocate for her in the media. Her brother and stepmom have also shown their pride for her.