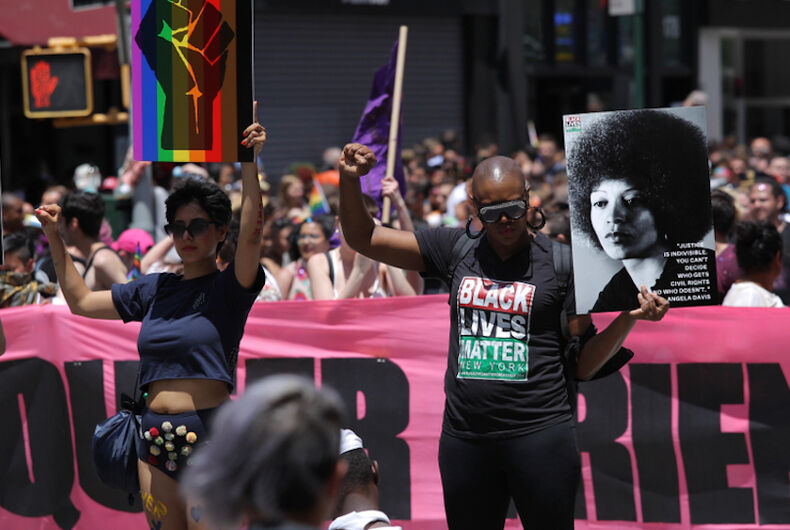 The LGBT Houston Facebook group asks prospective members looking to join, “We do NOT support BLM do you?” A post on its page, shared from LGBT San Antonio, reads, “BLM planning to burn our church down & end Christianity.” It links to a professor running a series on “Teaching Black Lives Matter through Islam and Muslims.”

Another post on the LGBT Houston page, presumably approved by the page’s moderators, declares “BLM is funded by ISLAM aka ISIS. They are planning on burning places of worship soon.”

Posts on the LGBT San Antonio page ask whether racial justice protesters will try to tear down the Statue of Liberty and whether Black lives matter more than the lives of Asians or “the unborn.”

One LGBT San Antonio post links to an article on the anti-BLM and anti-queer Irish website, gript.ie, stating that BLM protesters want to take down statues of “white Jesus.” The accompanying Facebook caption says, “This really has went far enough already. Stop trying to pick a fight with GOD.”

[Martin Luther King] would be rolling in his grave over how your pushing civil rights movement back into the stone ages. We achieved marriage equality, interracial marriage and even a black president by NOT ACTING CRIMINAL OR RIOTING. Don’t bring up stonewall that was over 50 years ago. BLM even has the LGBT community ACTING like toddlers throwing a tantrum instead of registering to vote or peacefully PROTESTING.

These posts conflate all Muslims with terrorists when polls have shown many Muslims oppose ISIS because the group kills more Muslims than any other group.

These posts also conflate the hundreds of thousands of peaceful racial justice protesters with a much smaller number of looters and rioters, and defend the maintenance of public Confederate statues honoring those who fought against the U.S. government to maintain slavery.

It’s unsurprising that some LGBTQ people hold these views, but they’re historically ignorant and reinforce conservative tropes that have been used to justify violence against Blacks and people of color for generations.

The Facebook groups do not appear to be associated with any LGBTQ nonprofit organizations in Texas.