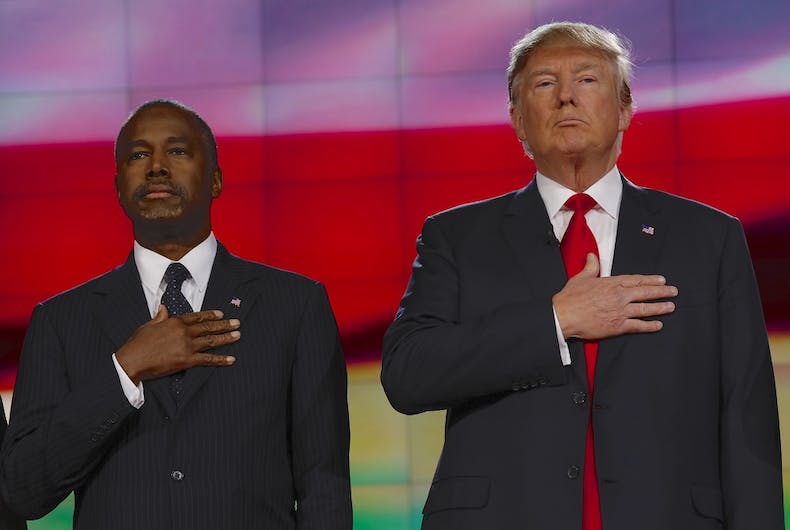 The Trump administration announced that it is close to changing an Obama era rule so that homeless shelters can more easily refuse to take in transgender people.

The Department of Housing and Urban Development (HUD) announced in a release several changes to the Equal Access Rule, which was updated in 2016 under President Barack Obama to require those homeless shelters that receive HUD funding to house people according to their gender identity.

The Trump administration’s changes to the Equal Access Rule will allow homeless shelters to accept people according to either gender identity or “biological sex” (which, presumably, means sex assigned at birth). So a homeless shelter for women, under the new rule, would be allowed to refuse transgender women and a shelter for men would be allowed to refuse transgender men.

The announcement, though, says that shelters “must not discriminate based on sexual orientation or transgender status.” While the Trump administration refuses to use the generally accepted vocabulary for discussing transgender issues – making their statements confusing and unclear – this sentence may mean that a shelter that only accepts people assigned female at birth would not be allowed to refuse transgender men.

The announcement says that shelters that refuse transgender people must refer the person being refused to a shelter that will accept them, which may be a problem in small and conservative communities with few alternatives.

The release also says that shelters that accept transgender people have to provide alternatives for cisgender “persons who have concerns with being housed with persons of a different biological sex,” because the HUD policy is based on the idea that transgender equality harms cisgender people.

HUD Secretary Ben Carson has been pursuing the changes for at least a year, and it’s a topic that he has been grilled on several times when testifying before the House. He has justified his position by calling LGBTQ protections “extra rights” that “impede the rights of one for the sake of the others” because, he said, cisgender women are “not comfortable with the idea of being in a shelter, being in a shower, with somebody who had very different anatomy.”

The announcement says the rule change will allow shelters to set policies for “safeguarding victims of domestic violence or human trafficking,” implying that transgender women are a special threat to cisgender women who have been victimized.

The HUD release echoed Carson and said that the rule change would “better accommodate religious beliefs of shelter providers.”

Transgender activists denounced the rule change, saying that transgender people have a greater need for homeless shelters and that the policy will lead to transgender and non-binary people being denied access to those shelters.

The ACLU tweeted that the rule change is happening “in the midst of the highest unemployment rates our country has seen in decades.”

BREAKING: Trump is proposing a rule allowing federally funded homeless shelters to turn away trans and gender non-conforming people — in the midst of the highest unemployment rates our country has seen in decades.

According to The Advocate, the changes to the Equal Access Rule will go into effect after a 60-day public comment period.

The Census can’t keep LGBTQ people in the closet