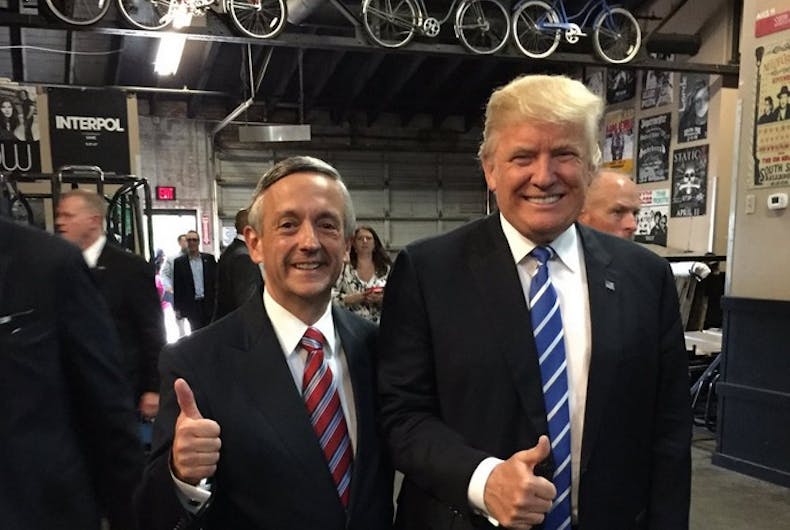 The Trump administration resisted giving a public accounting of where it spent money meant to support small businesses through the coronavirus pandemic, but today they released a list of loans given out worth over $150,000. The Paycheck Protection Program provided forgivable loans to keep employees on the payroll through the shutdown.

A handful of anti-LGBTQ hate groups and televangelists potentially raked in over $16 million.

According to the Small Business Administration (SBA), the average loan size was $107,000 – including smaller loans not included in the list.

The document dump shows that the American Family Association (AFA), a religious right powerhouse, was approved for a loan worth up to two million dollars. The Southern Poverty Law Center, a group that tracks bias crimes and dangerous extremists, has designated the AFA an anti-LGBTQ hate group.

Televangelist Robert Jeffress’s Dallas megachurch was approved for a loan between two and five million dollars. Vice President Mike Pence recently spoke to over 2,000 people inside the church despite the dramatic surge in coronavirus infections in the state.

Jeffress once told a suicidal lesbian to go to conversion therapy, a widely debunked form of psychological torture, to become heterosexual. He believes all non-Christians — including Catholics, Mormons, and Muslims — are going to hell.

Televangelist Joyce Meyer’s outfit, however, got the biggest boost from the pandemic fund as actual small businesses were forced to close their doors. Despite being investigated repeatedly for financial shenanigans, Joyce Meyers Ministry was approved for five to ten million dollars.

Overall, religious organizations and churches scooped up a total of $7.3 billion in pandemic aid from the SBA.

Two prominent LGBTQ organizations were listed among the recipients. The National LGBTQ Task Force was approved for loans between $350,000 and one million dollar while the LGBTQ Victory Fund got between $150,000 and $350,000.

How can COVID-19 deniers be forced to reckon with reality?