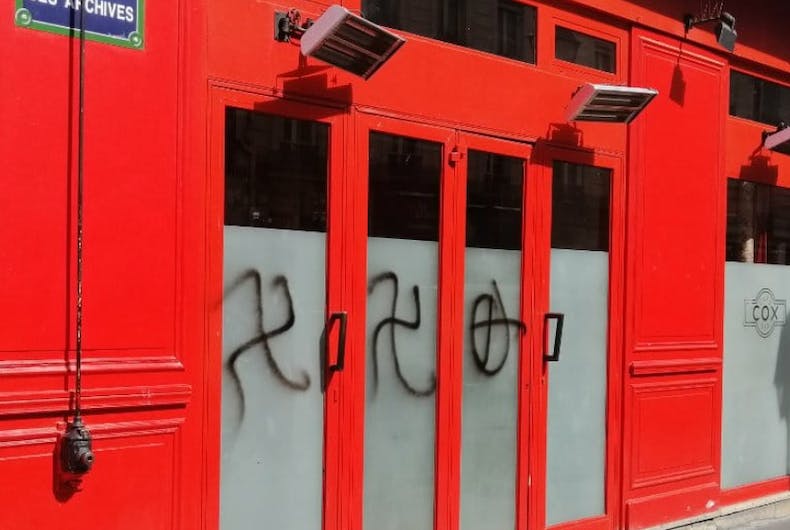 Two LGBTQ bars in France were vandalized with swastikas over the weekend.

Local elected official Boris Jamet-Fournier tweeted a picture of the downtown Paris gay bar Cox with swastikas painted on it early Monday morning, saying that he saw “the marks of hatred” this morning.

Jamet-Fournier called the graffiti swastikas “a reminder that the fight against intolerance has never ended.”

“Paris is an inclusive city and, as [Mayor] Anne Hidalgo reminds us regularly, will never accept hatred and LGBTQI-phobes,” Romero-Michel wrote.

Dimitri Morvan, assistant director of the Banana Cafe, said that the graffiti happened in the middle of the afternoon while the bar was closed but was caught on security camera.

“In security camera footage, we can see three people put on ski masks near the bar,” he told Têtu. “Two of them stand watch while the other spray-painted.”

He said that the vandalism happened quickly and that those who did it ran away. “The crowd was shocked to see young men in ski masks running. Some of them must have thought there was a bomb.”

Cox owner Frédéric Hervé said that the attacks were “shameful.”

“First it was Banana, then it was Cox,” he said. “The LGBT+ community is clearly being targeted by these ignoble acts.”

Mayor Hidalgo shared an image of the vandalism and condemned it.

“These messages of hate and homophobia don’t have a place in Paris,” she wrote. “I hope that those responsible will be quickly identified and brought to justice.”